Much to my surprise, and perhaps a bit to my horror too, I have grown to like football.

New Yorkers seem almost duty-bound to be loyal to the Giants and the Jets but, to me, those are New Jersey teams. "My" team is the New England Patriots. I admire their style, for the most part, and have enjoyed watching them kick butt on the field for the past couple of years.

Little did I know that this year, as the Patriots head to the SuperBowl to tackle New York's Giants early next month, there would be another quality to endear me to the Patriots. One of their newer players, Kelley Washington, acquired from the Cincinnati Bengals, does a touchdown dance called "The Squirrel." 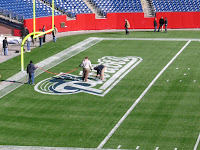 You may (or may not) remember the squirrel who graced Yankee Stadium last year, and who antics found their way into the media and a couple of my posts here on this blog. I dislike baseball intensely but this Yankee squirrel actually added some real interest in the game, albeit temporarily. This squirrel did not dance, but he sure showed style sitting atop a pole on the playing field.

Now we have the football "Squirrel" - a lively victory dance Washington made up and then made famous while still playing in Ohio. The Patriots have scored quite a few touchdowns this year but Washington has kept his dance squirreled away.

Here's hoping we see some fancy footwork next month in the end zone by Washington's teammates. I'd sure love for the Arizona game to become a victorious "Squirrel Bowl."
Posted by squirrelmama at 10:35 PM

Gee, I live in New England, but wasn't aware of the squirrel dance. Guess this is a measure of my lack of football expertise.

I'm not a big American Football fan, although back in 1984 I watched a PBS program put on by the Buffalo Bills that instructed viewers all about football and I learned so much that I watched that year's SuperBowl all by myself! Haven't been able to re-ignite that spark since. I do occasionally watch the "Footy" (English Premier League Soccer) with my husband who is a fanatic for it.

Squirrelmama, I've tagged you for a "10 for 10". Come by my blog and find out what that's all about.
Kat

Kat,
I loved visiting your blog and reading what you'd written....I shall happily rise to the challenge; however, my brain must be too full of old moldy acorns to understand completely what I need to do. How many verses shall I complete, and where may I post them?

Squirrelmama, you don't need to do verses if you don't care to. Just a list of 10 random things about you, posted on your blog - and then you tag 10 people to do the same. I look forward to finding out a bit more about you.
Kat

ah yes, as the squirrel said to the nut, I'd better get cracking then