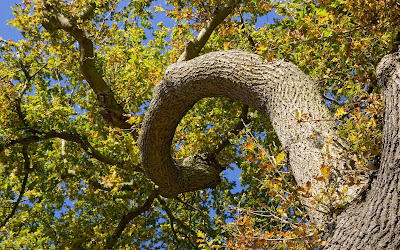 No squirrel is likely to argue with this: If you're already out on a limb and looking to jump, don't leap until you're certain the next branch will hold you.

So it was with the blog post of April 9 for "Grey and Red, A Squirrel Journal." Out on a limb is precisely the spot where we were when we sat down to declare the Prince of Wales, Prince Charles himself, as a man for all squirrels. The praise here practically constituted a coronation.

It might have paid to look a bit further. The branch to which we were leaping was not quite right. Charles is a man for red squirrels - all red squirrels, the beloved natives of his land - but God save the greys. In Charles' eyes the interloper greys are persona (or rodenta) non grata, as fellow blogger, the aptly named Lone Grey Squirrel, wasted no time in pointing out.

In a June 9, 2009 post on his own blog, Realm of the Lone Grey Squirrel, he takes Charles to task, and rightly so. The prince, it seems, has shown neither decency nor humanity in dealing with the greys brought to the UK from overseas.

In short, Charles wants them exterminated simply for the crime of living and breathing on British soil, a land they did not migrate to of their own accord. In likening Charles' not-so-modest proposal to ethnic cleansing, my colleague Lone Grey Squirrel is right on point. 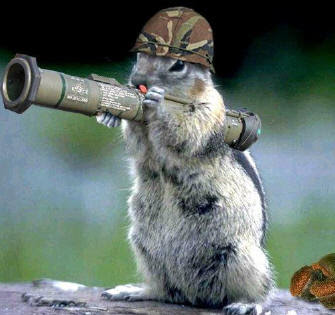 History has long recorded royalty's desire to wage blood-soaked wars to protect a nation from invaders, but these are not savage warriors possessed of bushy tails and spears. The eastern gray squirrel is a victim too.

Shame on the royal family for showing no compassion for the displaced. Shame on Charles for his declaration of war in 2009. It is a fine attribute to care for and protect one's own, but an even higher calling to help those living in a strange land, with nowhere to hide.
Posted by squirrelmama at 2:56 PM 1 comment:

Loyal to the death

This is a very painful video to watch.
And yet I couldn't take my eyes off it.
I will never forget the image of this squirrel, hovering protectively over the body of a second squirrel. I am guessing, from the location of the body, the first animal had been struck by a car and killed. But those are not the details that matter.

The surviving squirrel fiercely protects what is left of the other squirrel. Could this be maternal instinct that did not die with her offspring? Could this be something else perhaps?

In case anyone ever has any doubts about the emotional intelligence that thrives within these tiny bodies, watch this video. Then watch it again.
Posted by squirrelmama at 12:52 AM 5 comments:

A prince of a guy

It's no secret that Prince Charles is an open advocate of the imperiled native red squirrel, and he has referred to the tiny rodent as "this precious little animal," an argument it would be hard to challenge him on. 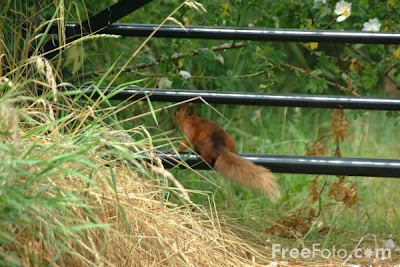 It is also no secret that he is a major player in the UK's Red Squirrel Survival Trust, which seeks to protect the nation's reds.

But the Prince obviously considers newspaper inquiries about his advocacy to be, well, something of a royal pain. A recent request by the Times newspaper in London, wanting to know more about Charles' lobbying on behalf of an ecologically (and squirrel-logically) friendly property developer was rebuffed by authorities, which called such information "a state secret."

Though love of squirrels should never be classified information, when love and politics mix, the rules apparently change - at least in government's eyes.

In the meantime, it is good to know that the Prince holds the native red squirrels dear, and that in the kingdom of his heart, they are truly the reigning species. If only they could learn to share with the greys, what a peaceable kingdom it might be.
Posted by squirrelmama at 3:13 PM 3 comments:

But three baby squirrels called her "momma," at least for a while. The mother dog had just finished weaning her own puppies when her milk became precious, life-saving elixir to the three infant squirrels displaced by a felled tree in the homeowner's yard.

The Daily Reflector newspaper carried this story, and with it, some photos of the mother dog and her little adopted youngsters.

When it came time for the babies to move on to care with a licensed rehabilitator, Pixie went through some maternal loss, or so the story says. Her owners are reportedly helping her overcome some of the sadness of no longer nursing young ones.

As for the three babies, they have their own challenges that lie ahead. Two seem to be faring well but the third appears to have difficulty processing and retaining food. There likely will be no followup in the newspaper to give details of the babies' fates, but one can only hope that their time with this generous and loving mother dog will have given them all strength - especially the weakest one - to go forward in life when the time comes.
Posted by squirrelmama at 10:28 PM 5 comments: