Squirrel is my co-pilot

What's next? Drivers' licenses for squirrels? It's only a matter of time, apparently, even though we already have more than our share of nuts behind the wheel.

Take the recent case of the Clay County, Florida motorist who was pulled over for DUI - driving under the influence. Turns out there was another reason he was driving distracted: He was also Driving Under the Influence of a Squirrel. A small bushytail was busy navigating the roadmap of the driver's chest hairs and had obviously entered a problematic intersection, or perhaps it was a bottleneck, somewhere in the southwest quadrant of the human's abdomen. Without any GPS to help him, the squirrel obviously freaked.

Still, a moving violation is a moving violation. The squirrel did not deserve a ticket but the driver clearly had one coming. Probably two: Owning a so-called "pet" squirrel may not have merited a fine but it's clear the squirrel - as seen in a video shot by the local TV station, WJXT - was quite young. Where was the government-mandated booster seat for infants and children? Had this driver been the parent of a 10-month-old, would he have considered it appropriate to stick the child in his underwear too? 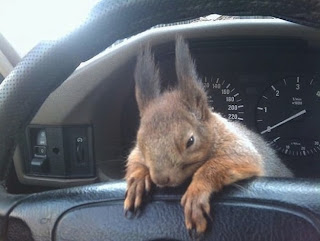 As any Department of Motor Vehicle Commissioner will tell you, there are clearly proper ways to drive with a squirrel in one's vehicle. Pay heed then, to the example set by Pyotr Pankratau, who was a soldier in the Belarussian army when rescued a young Eurasian red squirrel. The creature who has so adapted to his caretaker's civilian lifestyle that he rarely leaves his side, even when Pankratau goes on his rounds as a taxi-driver.

It is noted that, in all photos seen on the Internet of Pankratau and his squirrel, Minsk, the animal is never shoved up his shirt. In fact, he keeps a respectful distance from any kind of underwear while on duty. Yes, in a few photos, Minsk is seen on the vehicle's dashboard - as an auto accoutrement one might liken to fuzzy dice or a living, breathing bobblehead doll - but let the record show that the taxi is always safely parked - and the engine is off - whenever the squirrel is in motion.

And he never gets behind the wheel. 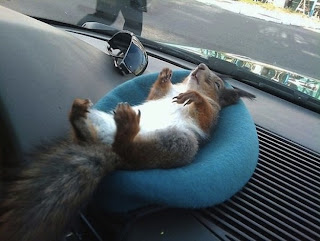 Perhaps the philosophy of Squirrel Chauffeuring is a different matter in Belarus - or anywhere outside the United States, for that matter. But the safety issues are clear:

Before getting behind the wheel, park your squirrel somewhere safely. Drunk or sober, friends don't let friends drive squirrels.
Posted by squirrelmama at 10:36 AM 6 comments:

Down to a science

Oh, it's not that this champion of the Scientific Revolution was wrong. But his timing surely was. The 17th century that marked Galileo's lifetime was at least three centuries before the birth of Squirrelfest. If only the wise professor from Pisa had been able to make his way to Longview, Washington this summer - thus crossing an ocean as well as a vast expanse of forward-moving time - he'd have experienced first-hand that many things can indeed occupy the same space at the same time through the magic of devotion to all things squirrel.

In Longview, residents celebrate the city's mascots by taking to the streets in this daylong event, which just marked its second year on Aug. 25. The day is a concurrent celebration of Thanksgiving, Christmas, Memorial Day and Independence Day.

Only in this Pacific Northwest city can these holidays occupy the same time and space in seeming defiance of scientific theory: 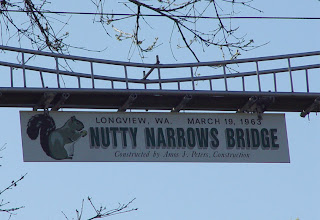 Longview gives thanks for its squirrels and for the safe roadway crossings many have enjoyed since 1963 when one kind resident, Amos Peters, built Longview's first squirrel bridge as a gift that would help ensure their safe street-crossings. The installation of "Nutty Narrows" eventually inspired two other bridges. This year's award-winning span, the city's third, was an aluminum design from a retired attorney who'd died only weeks before the dedication ceremony.

It's a pity Galileo didn't know of Squirrelfest. He would surely have embraced it for its squirrelcentricity. The scientist was among the first, after all, to stand beside Nicolaus Copernicus after the Renaissance astronomer declared his radical theory that - hold onto your acorns, folks! - the Earth and other planets revolved around the sun.

The sun? That's not necessarily as true in Longview, Washington. There, everything revolves around the squirrels - even the sun of Nicolaus Copernicus. Its own perfect squirrelcentric orbit is made even more perfect by the way its rays wash down brightly, illuminating their path as they cross the newest squirrel bridge in town, then leap gracefully to safety in sunlit woods beyond.
Posted by squirrelmama at 1:08 AM 2 comments: