Giving no thanks for all they can eat 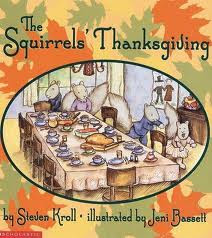 They are guests at my Thanksgiving table, and they are too numerous to count. How fortunate they haven't demanded use of the good china, which maxes out at 12 placesettings.

They feast on a stuffing of pecans, walnuts, almonds, berries, corn kernels and the occasional acorn. There is no turkey on this menu - they would not want it anyway. They need no gravyboats or soup spoons. They need no neatly folded napkins.

They simply gather together, each and every one jostling, reaching, munching and squabbling, just like any other ravenous family whose uneasy reunion is spurred by a desire to gorge. In fact, the familial resemblance between them is startling. Gray, after all, is an easy middle ground that even the not-so-style conscious can embrace. Still, it is hard to discern the mothers and fathers from their own offspring. A big appetite is obviously an inherited trait, a dominant gene, and they have passed it on through the generations.

To get to this feast, they had only to battle the holiday traffic out of the tree limbs and the tree trunks. Repeatedly. And by nightfall, they will be bloated with the day's digestion and their own self-importance. Today, after all, was all about them. Wasn't it?

No, they will not say grace before this meal. They never do.
Nor will they give thanks afterward. They never have.
And if supplies run short, they will merely chatter their teeth, stamp their feet and perhaps the boldest among them will take a catapult leap at the screen door. This Thanksgiving buffet is, after all, an outdoor table.

Ah, but the leftovers: An untouched acorn, buried for another day and then forgotten, adds to the forest. A bypassed walnut, packed deep into the earth, begets a tree. Perhaps then, for desssert, we need to serve a slice of gratitude of our own instead.

Let us give thanks, even if the squirrels - boisterous, bad-mannered and bawdy as they are - do not.

May our hearts and our doors always be open to them.
Posted by squirrelmama at 3:40 PM 5 comments: 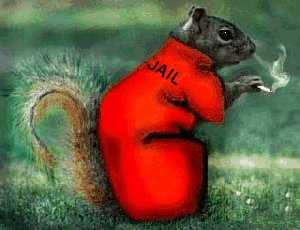 Your Honor, she is not a criminal. Annick Richardson may be many things, but the Ohio woman is not a criminal. The London Daily Mail, which has been following her case, describes her in its headline as a "Compulsive Squirrel Feeder." The somewhat less imaginative press here in the United States, simply refers to her as "nuts," careful to adorn the adjective with quotes, lest the media themselves end up in court themselves on defamation charges.

And now, the Ohio animal-lover has had her day in Kettering Municipal Court, facing as much as 60 days in jail and considerable fines, for blanketing her suburban Ohio neighbohood with peanuts, squirrel feeding stations and dishes of water. The neighbors claim that her Johnny Appleseed-like actions (Joanie Squirrelseed, perhaps?) have spurred a sudden and rapid increase in the local squirrel population.

Please, folks: Richardson is merely feeding the squirrels, not copulating with them.

Besides, peanuts are not fertility drugs - we would have a less truncated elephant population if that were so. Peanuts are simple legumes. (Frankly, if Richardson should be faulted for anything, it is for not feeding a more natural food such as walnuts or pecans, since legumes are not nuts and, as such, are not "real" squirrel food. But that is beside the point. Or perhaps she is also guilty of spreading America's obesity crisis to its native rodents by super-sizing them.)

Her Ohio neighbors are weary of finding spent shells - the kind fired by double-barreled squirrels - and tired of the lawns being dug up (which, by the way, many suburbanites pay a hefty fee to have done by professional landscapers each spring. But again, that is beside the point here too.)

A confident Richardson has assured the press she is not a villain nor is she a monster. A pre-trial hearing has been set for December to pursue her case yet further.

Ah, but perhaps we squirrel-lovers shall all ultimately be jailed for our presumed sin. We have gotten the local squirrels hooked on the Nut Drug, then made regular drug drops in our neighborhoods to keep the addicts in line.

Your Honor, if she is guilty then we all are too. Shackle us all and lead us away. But provided our county jails still allow visitors, as most surely do, we should not despair:

Even in the toughest holding cell, the space between the bars is wide enough to permit entry by the very small. And I suspect that one swift, fur-bearing, bushy-tailed visitor will not forsake us in our incarcerated state.

In one paw, no doubt, will be carrying a small gift for us, the wrongly imprisoned: Neatly sandwiched between two shelled pecans, a jailer's key.
Posted by squirrelmama at 10:13 PM 2 comments:

Suddenly, everyone’s preoccupied with the "Occupy" movement. The whole world (or at least 99 percent of it) seems to want a piece of the Occu-Pie. 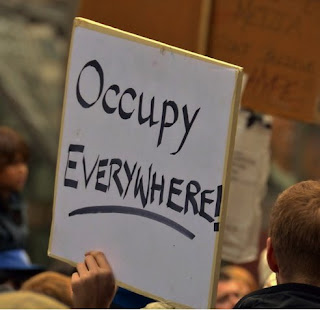 Squirrels Occupy New York. (That makes their piece of the Occu-Pie the pecan pie, presumably.) Though many other U.S. cities presently have gatherings similar to the protests near Wall Street, only New York has this special collective of Professional Gatherers.

Theirs is not a protest, however. And it’s not even anything new. Squirrels have always been a part of the city – accosting visitors in the sprawl of Central Park or maybe trailing any other well-meaning, nut-bearing humans in places as small as the city’s numerous vestpocket parks.

Squirrels, it seems, have almost always Occupied New York in a more concrete (or bronze) fashion as well: Their likenesses are carved into the facades of buildings and you can find their distinctive forms immortalized in bronze statuary in green spaces.

Across the city, architects and artists seem to love them too.

And now there is a catalogue of this occupation: A most wonderful blog, "Ephemeral New York," celebrates the metropolitan bond with bushytails in its Nov. 17, 2011 post about these ubiquitous likenesses. Best of all, there are photos. Artists’ interpretations of squirrels adorn bank buildings and flank apartment buildings, accompanying the post, called “The squirrels that decorate New York buildings.”

Rest assured, these figurines are more than merely décor. They are New York acorn icons.

Ah, there is much here to dig through – an action our tiny heroes would clearly endorse engaging in. And there is perhaps even more to be found, yet to be unearthed.

Worry not: the squirrels will get around to it, even if we don't. Right now, however, it’s autumn and they’re a bit preoccupied here in New York.
Posted by squirrelmama at 11:34 PM 2 comments: 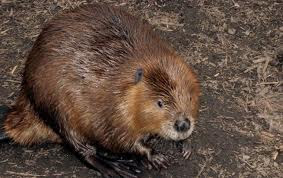 As our beloved blogger colleague, the aptly named Lone Grey Squirrel, has suggested: forget the beaver, forget the polar bear. What about the squirrel? As a Canadian with a strong interest in the outcome of this sparring of national symbols, Mr. Squirrel indeed raises an important nut worth cracking. (You can even vote on the critter of your choice, by the way, by clicking on the link to his blog, provided here.) 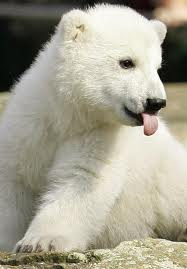 One Canadian politician recently lauded the polar bear as worthy because of its "strength, courage, resourcefulness and dignity," and trounced beavers as "dentally defective rats." Putting aside such blatant animal defamation (and idle fantasies of casting the senator out into Canada's woods in the heart of winter), let us step away from this hairy debate and instead consider the simple merits of the squirrel.


In an environment of global economic crisis, the squirrel is resourceful to the point of hoarding. The squirrel's motto: "Cache as cache can" could become the lyrics of a new global anthem in this money-strapped world of ours.

At a time when charitable giving and worldwide cooperation is stressed for our communal survival, who is better equipped to go out on a limb for us all than the squirrel?

And finally, in an era full of negative thinking, the squirrel remains ever bright-eyed and ... well, you know. 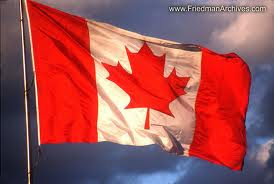 We are not here to defame his distant cousin, the beaver. (Nor are we here to "dam" him.) Likewise, we will not engage in polemics over his polar challenger.

There, neatly nested in the intertwined foliage, you shall find him. Loyal patriot, he's simply waiting for the call to duty.
Posted by squirrelmama at 6:32 PM 6 comments:

Squirrels have got the economy beat. They don't lose sleep over the news that there's a 9 percent jobless rate. When it comes to the industry of being industrious, squirrels are nature's own CEOs.

In fact, the U.S. Department of Labor may be baffled to learn that there is practically a Zero percent squnemployment rate. Not one squirrel in this country is presently collecting benefits.

Instead, you can find in them in commercials (Recall the dancing squirrel in the Radio Shack "Squirrel Sunglasses" commercial earlier this year?) Or in ad campaigns, including point-of-purchase posters (Monroe Shocks & Struts has made a career out of having several eastern gray spokesrodents give glowing endorsements to their auto parts). And let us not forget the "Rally Squirrel" whose impromptu antics on the diamond turned this year's baseball World Series into a cause for cheering (even among those among us who are non-sports fans).

And in a few short weeks, Alvin & the Chipmunks - possibly the only tiny ground squirrels of their species who come out of hibernation at Christmas - will be busy serenading yet another generation with their holiday tunes. When it comes to seasonal popularity, they almost out-Santa the big guy.

And let's not forget all those anonymous squirrels working hard these last few weeks, burying acorns - saving for the winter, and for future generations.

So next time one crosses your path - whether you're driving, riding your bicycle, or just taking a stroll - be nice. In fact, offer a handful of nuts, a smile and some kind words.

If the economy continues the way it's been going, you might just be looking at your next boss.
Posted by squirrelmama at 11:29 PM 2 comments: