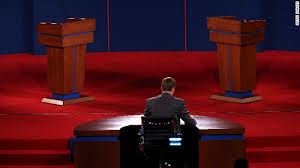 In the American political landscape, where the present presidential skirmish once again pits the Blue against the Red, squirrels - who dwell happily in the land of the Grey - opt out:

The world of the Eastern Grey is very much black and white: If you've got a nut, they'll take it. If you don't, there's no deal.

The squirrels' only campaign is to effectively charm you so you elect to empty your pockets in their presence. These nut offerings aren't political handouts, however. Nor are they campaign contributions. In this world populated by tree-dwelling citizens, acorns, walnuts and pecans are merelyy hard-earned wages from a full day of hard-core squirreling, a day's labor that begins as the sun rises, and doesn't cease 'til it sets.

And while squirrels can dig up dirt better than any political candidate, they're not looking to discredit any opponent. They're simply saving for the hard winter ahead.

Social Security? That's their "nut cache." Free medical care? It's called "wildlife rehabilitation" (and a squirrel is likely to qualify for it only if they're fortunate enough to be saved by a savvy rescuer).

There is a reason the donkey and the elephant were selected, over the squirrel, to symbolize American politics. Call them what you will, but American rivals Barack Obama and Mitt Romney are anything but squirrelly. Let them debate this season on every major network, in every state and on every stage, and let them hash out the national deficit, military conflicts, and the healthcare conundrum.

What it really comes down to is this: Can either candidate crack walnuts with his teeth? Can either build a nest in fewer than 24 hours? And can either man leap effectively from treetop branch to branch with the same energy they use to jump over each other's logic.

The world - and the voters - may be watching, but do the squirrels even care? That's debatable.
Posted by squirrelmama at 6:48 PM 2 comments: