Sci Fi at the feeder

This is for all the Sci-Fi fans, devotees of fantasy literature. For if there are any audible sounds that can inspire wild, fanciful impossibility, they can be summoned by uttering these five simple syllables: 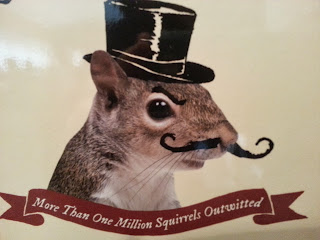 With this optimistic mantra as his book title, author Bill Adler Jr. has launched the third edition of the popular how-to, penned ostensibly to defend the honor and integrity of our nation's birdfeeders. But those of us in the know, the lucky few with the inside track, are painfully aware that this treatise is merely thin disguise for the anthem of a movement to thwart a purported Apocaplypse of American Democracy. By now, it is no secret: There are plans for a coup that will establish Government By Squirrel. (This is not, as some allege, a movement born in the underground. In fact, most of the conspiracy is taking shape in the treetops).

Adler's words serve as gentle propaganda to alert the masses of political overthrow proliferating on our lawns. Why else would his book feature an otherwise handsome visage of a squirrel, brazenly depicted on the front cover, depicting an unsuspecting Eastern Grey Squirrel as Snidely Whiplash, complete with bowler and moustache? This image is obviously PhotoShopped: no self-respecting squirrel would be caught in a bowler, and such stylized facial hair went out in the '60s.

The book's heart and soul, though, is the "101 Cunning Strategems" as its manifesto, many of which make an attempt to be cruelty-free. (The lack of a call for military intervention, by the way, is commendable - not just because most conflicts can, and should, be solved without militia and bloodshed, but because our nation's Department of Defense budget is already strained above its limits, and such open combat with the nation's rodentia has the potential to make the Crusades look like grade-school recess.) The squirrels would win, anyway.

Perhaps, though, if the word "war" is to be used at all in this context, it is best to invoke the image of the Cold War.

Indeed, in one chapter, "What to do if you think squirrels are cute," the author even offers a photo - no PhotoShopping here - of then-Soviet security chief Mikhail Dokuchayev feeding a squirrel on the lawn of the White House in 1988, at the time of Soviet General Secretary Mikhail Gorbachev's visit. (No question about the symbolism here, even though none of the squirrels in our nation's capital are now - or have they ever been - Red squirrels.)

And so we say this to Bill Adler: Your rights to free speech (and the freedom of your book's presses) are protected by the same Constitution that safeguards the squirrels' inalienable rights to crack their nuts in peace. And at heart I sense that the science of your fiction is more fiction than it is science. Toward that end, Strategy #101 exhorts us, perhaps a bit breathlessly, to "decide that squirrels aren't so bad after all."

Smart thinking, Mr. Adler, for they are, even now, ascending the trees enroute to the American Presidency. The Revolution will not be stopped. (Besides, a squirrel statesman could do no more harm than the past few administrations.) Therefore, open your heart and the nut-filled palm of your hand and - to borrow a phrase from some old Sci-Fi classics - Take Us to Your Feeder.
Posted by squirrelmama at 2:51 PM 3 comments:

Punxsutawney Phil is not accepting PayPal, AmexGold or even plain hard (frozen hard) cash. With our own local New York groundhogs, it could be a different story: Malverne Mel may be malleable, Holbrook Hal may be hedgy and Staten Island Chuck may be swayed by New York City politics, but deep in the heart of rural Pennsylvania where Groundhog Day has its deepest roots, Phil’s going to tell it like it is. If he turns a cold shoulder to your misery, well, that’s his job. 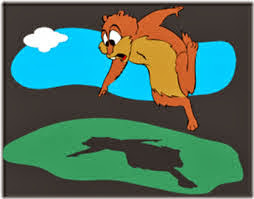 Our nation’s prognosticating rodent is no Polar Pete, he’s no Vortex Vinnie, no Arctic Artie. Phil's the latest in a long line of prediction professionals, proud of the heritage that puts him in the spotlight, and out of the shadows, for one day each year.

What? You’d rather swap him out for Scrat, the prehistoric cartoon squirrel from the hit “Ice Age” films? After all, gregarious, undaunted Scrat not only could foresee the weather that lay ahead of the world, he then went out and actually caused it, and simply by pursuing the beloved acorn of his dreams, he changed the shape of entire continents.

Ah, if only it were that easy. But Phil, you see, is going to keep this game honest. He’ll declare his weather decision at the break of dawn and hours later, that very same day, he’ll decline to offer cold calculations on the Super Bowl. In fact, he’ll probably sleep right through it because spring’s own kickoff is the only one he cares about and that’s still a few weeks away.

You see, Phil is so downright upright that, even when he's curled up in happy hibernation 4 or 5 feet below, he's still a stand-up guy.
Posted by squirrelmama at 2:51 PM 1 comment:

Suddenly the treetops have become X-rated.

Suddenly you have to be 18 years of age -- or older -- for permission to feed the squirrels.

Suddenly the phrase, “Don’t touch my nuts,” takes on a whole new connotation. 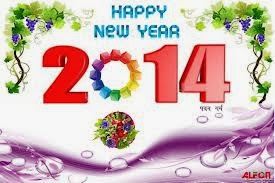 It was barely a half-day into the new year and I’d personally interrupted more than a few, uh, baby boom production teams in executive session. And not a single one of these creative confabs was preceded by so much as a candlelit acorn supper or even a movie (“Nut Job,” perhaps? Why not? The animated film is being released later this month under the banner, “No Nuts, No Glory.”)

Anyone looking to get a piece of tail -- even bushytail -- more efficiently than a treetop tryst should perhaps consider online dating.

As if these libidinous visuals weren't enough to contend with, the nonstop squeaking and grunting is enough to make the likes of Larry Flynt blush and send Linda Lovelace to a convent (behind a door of any color).

Admittedly, this is an annual bacchanalian ritual as necessary to squirrels as perhaps the Times Square Ball Drop is to some humans. But even this kind of ball action might have rendered the late Guy Lombardo and Dick Clark speechless.

Remember, dearest rodents: Yes, this is a time of renewal. But the watchwords of the new year have usually been: NEW YEAR, NEW SQUIRREL.