Some public acts turn the head, others the stomach. This is a case of the latter:

The Holley Fire Department, of upstate N.Y., is a bastion of life-saving volunteerism, comprised - according to its website - of a community of volunteers that has at their disposal two pumpers, a ladder truck, a grass fire/utility truck and other vehicles designed to preserve the sanctity of lives in peril. These are rescuers who on a moment's notice dispatch emergency medical services to care for their fellow residents whose lives and property are at risk - and, following moments of horror, sacrifice and personal sadness, also honor the fallen brethen who died honorably among them. 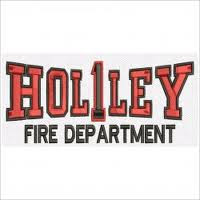 There is no question that putting one's life on the line, especially when rumuneration is little more than a thank you, is no mere trifle. Not everyone is capable of being moved by the volunteer spirit. It speaks to only a select few.

The same can be said about the killing spirit, particularly when the killing is done in cold blood - mass killings at movie theaters, shopping malls and too many schools have borne this truth recently. There are those who say such sort of hard-edged slaughter has to be nurtured, starting in childhood. Indeed, this very theory is central - even now - to our nation's hot-button debate on gun control, a dialectic being echoed here in New York State's Capitol building too.

So this leads to the question of why such a life-embracing team of courageous, unpaid souls would dispatch small children into the woods with loaded weapons to compete in something called "The Seventh Annual Squirrel Slam." Yes, this means six such contests have already preceded this one, leaving bags of kids' prized grey and red squirrel carcasses in their annual bloody wake.

What is the price of one life, anyway?

Inquire of the Holley Fire Department membership and by virtue of these volunteers' selfless deeds in safeguarding the human community, they will affirm that life is undoubtedly without price. It is worth saving at all costs and personal risk. Ask any firefighter's widow who lost half of her heart in a smoky blaze. Ask children whose father was overcome in the embrace of a building that collapsed around him.

But ask that question again on Sat., Feb. 16, and fire officials will tell you the price of one life: It is $50 cold cash. That's the top prize for the single fattest dead squirrel bagged by any child's gunshot. (And no cheating, folks: As the website advises "No internal packing or soaking of squirrels for added weight." You obviously cannot make one of these lives worth more than it is really worth.)

For a team effort, netting five dead squirrels, the reward is greater: The children get $200 to share among themselves. And in the spirit of progress, the good people of Holley's fire department have added a new category, making kids 14 and younger eligible to join in the slaughter. These prepubescent soldiers of fortune also qualify now to bring their dead fatties in for $50. Hey it sure beats waiting for that weekly allowance.

So Annie, get your gun. Better yet, get your tickets. They're $10 apiece from the volunteer rescuers of Holley and that price includes refreshments after the slaughtered animals have all been weighed. A mere $10. You can't even get a good movie ticket for that price.

Still, with $50 or more in hand, the victors can probably afford to go to the movies now and even treat their friends. Perhaps they'll take in a special screening of "The Hunger Games," watching teens just a few years older than themselves in that violent, dystopian Hollywood drama taking aim with their bows, arrows and guns. But this time, it will be on one another.
Posted by squirrelmama at 10:24 AM 29 comments:

Looks like the squirrels owe President Barack Obama an apology - and rightfully so. Although there was no conspiracy to upstage him, Monday, Jan. 21 - Presidential Inauguration Day and Martin Luther King Day - just happens to fall on Squirrel Appreciation Day. As conflicting major holidays go, this is turning out to be a real contest for the hearts and minds of the American people.

Granted, the president gets a parade - but how does one day's pomp and procession possibly compare to the grand promenades queueing down daily from the trees in our parks and outside our homes?

As for the Oath of Office? Think about this, folks: Article 2, Section 1 of the Constitution - which establishes that oath - isn't necessary for squirrels. Do they really need a formal, public and pre-scripted affirmation of their mission? 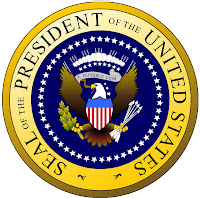 "I do solemnly swear (or affirm) that I will faithfully crack all the nuts I can find in these United States, and will to the best of my constitution, bury, cache and defend them."

As for inaugural banquets, visit any outdoor venue with more than a half-dozen pecan or filbert trees and you've got a gourmet gorgefest right there. Washington's ceremonial 3,000-calorie binge on clam chowder, bison and wild huckleberry reduction holds no appeal to the squirrels.

However, we do understand: Squirrel Appreciation Day is a solemn occasion, so it's no wonder the president wants in on some of the action. The squirrels are willing to share some of their 24-hour period and let the light shine on someone else for a bit.

No doubt, however, one of the best-kept secrets in Washington is sure to get out by the time the ceremony gets going. In the color of his suit, the most observant among us will surely discern the truth: If it is a subtle shade of grey - as is likely - we know President Obama is really using the occasion of his return to the White House to express his inner squirrel.

And on Jan. 21, of all days, the squirrels are certain to appreciate that.
Posted by squirrelmama at 12:18 PM 4 comments:

Your best investment yet

On Jan. 27, U.S. postal rates are poised for another increase. A Congressional deal to avoid the so-called "fiscal cliff" has hiked payroll taxes for workers. Gasoline isn't getting any cheaper. (The air, at least is still free).

But there is one cost-effective entity we can always count on, year after year: The squirrels.

Thanks to something called the Rodent Multiplier Effect, a little-known mathematical marvel, squirrels make it easy to maximize many of your investments with a minimum of effort: How else could you expend one walnut and get back 10 squirrels? (Note: This is only a theoretical model, actual results may vary.)

And with what other investment could you establish one simple wooden nestbox in a tree and, in no sooner than a week, discover you have attracted at least a half dozen occupants? The Rodent Multiplier Effect is not only foolproof, it is often swift beyond measure. 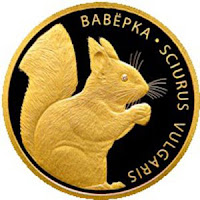 The most dramatic, if not chaotic form of investment, is to hang a birdfeeder: The almost immediate return comes as an ample supply of squirrels -- admittedly they are often the unintended result of such an avian-friendly gesture, but nonetheless they do comprise an excellent return on your investment. Stocks and bonds, money market funds and precious metals seem, by contrast, as flighty, mercurial and unstable as a member of the U.S. Congress.

It's sad that financial planners never advise their clients to consider a Grey Market investment. Still, in boom and bust economies, the squirrels are a constant - better than an annuity, and with minimum maintenance fees attached. Never mind if the Dow is up or down, squirrels are steadfast, hanging on your screens, looking in your back window, waiting on your front porch. You can count on it.

In these changing economic times, this is a comfort. Squirrels' characteristically high interest rates are unrestricted by law. And it's a certainty that their activity will climb: for them, the only way is up.

As we teeter between regression, recession and depression, we can find some peace in knowing that scratching sound we hear isn't coming from a wolf at the door -- just a 2-pound financial adviser who's eager to get down to business, squirreling things away for the long winter ahead.
Posted by squirrelmama at 11:01 AM 4 comments:

A Congress of squirrels 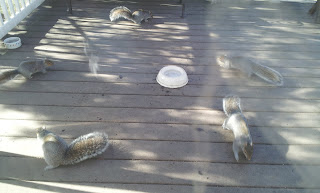 The 113th Congress of Squirrels has gathered today to renew their oath of office - and with it, no doubt, the partisan squabbling over whose district is in line to get the best nuts in the forest.

We're not talking here about political pork. Squirrels are notoriously vegetarian, for the most part. So the squawking will likely center, as it often does, on who gets the pick of the fattest acorns and - at this time of the year - who gets to breed with the fluffiest of the forest femmes.

Within the dominant party, the Squeaker of the House must be reaffirmed too. Squirrels, rugged individualists that they are, are simply more effective with this kind of leadership. 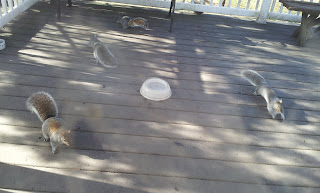 Then there is the smaller but just-as-important matter of selecting the Minority Chip. Ground squirrels (even the tiniest of the tiny chipmunks) need to get in on the political action too because most of our nation's meaningful legislation begins at the ground, if not the grassroots, level. Bringing it back to the burrow is sometimes the best way to get things done.The only challenge, one supposes, will be keeping this particular representative from nodding off during session and going into full-tilt hibernation - not unlike some humans, glazed over by the endless partisan bickering.

When it comes to threat of filibuster, though, these gnawmakers' preferences are more likely to turn instead to filberts as a means of cracking the national debt. Their job is to cache enough of them away, ensuring a multi-trillion dollar national deficit could never blight their landscape, at least not on their watch.

Yes, perhaps some resources will be diverted elsewhere: They will consider sending aid to the embattled red squirrels in the United Kingdom to help them contain the fevered spread of pox that has killed so many of their Eurasian cousins. Or maybe ship some assistance to India to ensure the continued protection of the striped squirrels there.

Back home, there is the continued and urgent vigilance to secure the future of our nation's pride - the prairie dog - and this effort too must be given the funding to succeed.

Fear not, it will get done by this tiniest of Congress - at least in our dreams. Because while squirrels don't find necessarily get their thrill from Capitol Hill (and who does?), all that squawking and tail-flicking doesn't go on forever.

Eventually the squirrels get down to business for the greater good of the species.

If only such radical ideas were humanly possible too.
Posted by squirrelmama at 2:25 PM 2 comments: