Pomp? There was none. And the circumstance was ordinary too: Three squirrels in the woods.

But it was commencement day for these three - valedictorians all – and their winterlong studies, as Squirrelology majors, paid off handsomely. Today they were carried into the woods and they stepped out as freshly minted grads. 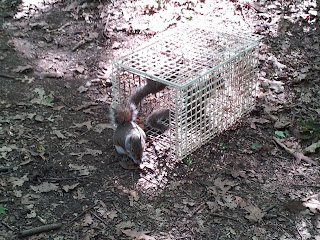 With the carrier hatch open, they emerged knowing what to do: With no podium in sight, they ascended instead to the trees. With no diplomas to retrieve, they foraged for leaves. No cap, no gown. Just a bushytail to turn, instead of a tassel.

Speeches? None that were discernible by human ears.

Make no mistake about it: Nature U presents a daunting curriculum. Mixed in with the ivy of its league are the ferns, the maples, the sycamores and the oaks. To be well-treed here is to be well-schooled.

Congratulations Class of 2012 as you bed down tonight. Each one of you is at the head of your class.

May you soar next to the level of your masters. A heart could be no braver

He is unspeakably fragile and small - not even 200 grams as of this writing - and his story could well be the stuff of legends, if only squirrels chronicled such things.

But he is too busy living his own remarkable survival to stop and record it.

He is, in the words of his rehabber caretaker, the "pygmy warrior," so christened upon his arrival in her care last month. He came nearly devoid of fur, pigmentation and general good health. 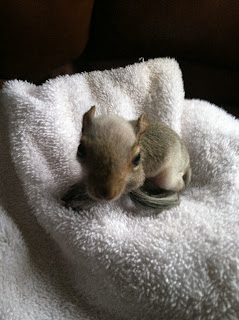 Heart was all that stood in his favor. It beat strong and sure in a body depleted and underdeveloped, the result of one man's determined but dangerously inappropriate attempt at hand-rearing.

He was one of two brother squirrels who never should have been in that misguided care in the first place. And, as such, the littermates soon required rescuing for the second time in their painfully short, unfortunate lives.

And now the pygmy warrior has emerged, under his wildlife caretaker's watch, as Braveheart, a little nobleman in his own right in the squirrel kingdom. Beside him is his brother Spartacus, no less a warrior, though this brother seems to have suffered less from those previous acts of human ignorance. 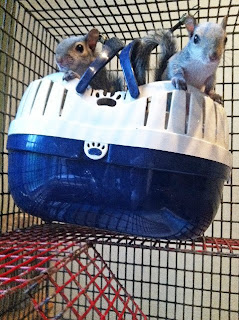 Both have since dropped their battle garb and are getting down to the business of being baby squirrels again. Instead of fighting for life, they can wrestle for fun. They are growing and gaining - and Braveheart is catching up, in weight and growth, to be what a young squirrel should be. His caretaker reports that his fur is, at long last, starting to emerge, along with a spunky personality.

History books may never record the quiet battles these small combatants wage every season, when fate, ignorance and the elements conspire to challenge their rightful place beside us on earth. Hollywood may never adapt their dramas to the big screen. And schools may never offer a curriculum in the fine and delicate art of wildlife survival.

But there are hundreds, perhaps thousands, of little Bravehearts out there in the wild. And if you listen carefully to the sound in the trees, moments after a young squirrel is released back into the wild, you might just catch the unmistakable cadence that is the heartbeat of a pygmy warrior.
Posted by squirrelmama at 10:46 PM 5 comments: