Love conquers all (if you're an acorn)

The way I see it (and I happened to see it twice so far), the movie, "Ice Age: Dawn of the Dinosaurs," is not an animated feature designed to enchant children and get adults to chuckle.

It is not even a slick 3-D cartoon populated by an appealing array of prehistoric personalities.

"Ice Age" is a romance. Plain and simple, it is an ode to the undying affection a squirrel (even a prehistoric one, such as the protagonist Scrat) has for his acorn.

Love is lovelier, or so it seems, when this third installment of the film series introduces the conquettish Scratte. Scrappy and sultry, this long-lashed female flying squirrel quickly steals Scrat's heart - and then, quite opportunistically, his acorn too.

It is then that the passionate embrace turns into what is known in the world of professional wrestling as the Full Nelson.

Had Romeo and Juliet been squirrels, the battle between the Capulet and Montague families would have had nothing on the fur that would fly when these young lovers squared off over an acorn.

Had Greek mythology's Orpheus and Eurydice possessed bushy tails instead of flowing robes, Eurydice - daughter of Apollo and herself an oak nymph - would have been no match for the mighty kernel that springs from, and gives rise to, the mighty oak. Her grieving, newly widowed husband, Orpheus, would sooner see his late wife descend into Hades itself than to endure any sort of living hell on earth without his acorn.

And so the heart of the next generation of trees holds a special place in the heart of each and every squirrel.

Love is what you make it. And like the acorn itself it, too, can be a tough nut to crack.
Posted by squirrelmama at 1:58 AM 1 comment:

The price of compassion 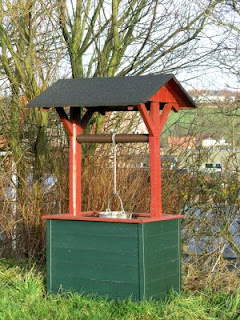 An electronic dispatch from the China News carries a story about the tragic death of a Sri Lankan man. He died of head injuries suffered after a fall inside his well.

What makes this especially tragic is that his death was the direct result of a selfless act, an act of compassion.

The man had been cleaning his 60-foot-deep well when he saw a squirrel fall into the water from above. The squirrel had been on an overhanging branch and apparently lost either balance or footing. In what was to become an ill-fated act of concern, good-will and compassion, the man climbed back down into the well and scooped up the little squirrel, saving the animal's life.

His next act is perhaps what sealed his fate: He put the small creature, for safekeeping, into his pocket to make it easier to carry him back up. But the squirrel bit him - frightened, no doubt, by his sudden captivity. And that is when the man lost his grip and plummeted to his death.

There are no words to express how truly tragic this is. The loss of good people always diminishes life on this planet for every one of us, and this is surely the case here.

Sadder still is how the news service chose to characterize this story: It is carried under the publication's banner of "ODD NEWS."

I did not know that compassion and selflessness were considered odd nowadays, and I am sorrier still that it reduces this man's sacrifice - the ultimate sacrifice, it turns out - to nothing more than that.
Posted by squirrelmama at 10:03 AM 11 comments:

Knoelle is in the trees now. At least I hope that's where she is.

She came into our care last September, a sickly, scarred, cat-attacked juvenile squirrel, found by some caring people at the barn where I ride. And with steady veterinary care and a remarkable spirit of her own, she eventually healed.

She grew. She thrived. She began to look out the windows of the little rehab clinic where we kept her and, no doubt, a longing for the wild, the place where she was born, stirred. 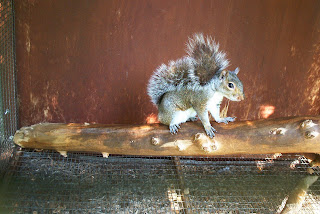 Springtime came. She cracked nuts, gnawed on a variety of things in her pen, buried edible treasures where she could, and her coat - her whole body - filled out. Her identity as a wild squirrel grew more certain as her gaze grew from docile to untamed. 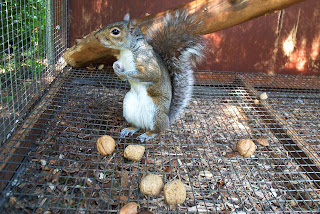 When I set her free in the woods early yesterday morning, a piece of my heart went with her into the anonymous mass of trees. I confess: I did not want to let her go. Not this poor sickly baby, as I still remembered her. Not this delicate, brave young animal.

But she had come such a long distance from last September's chance at cheating death. She'd grown healthy and hardy and was owed this rightful completion of her journey.

And so I carried her small cage back out of the woods - this time, empty. And Knoelle carried forward with her life - and may it always be full.

I don't suppose even in the arcane language of squirrels, the lexicon contains an equivalent of "goodbye."

Perhaps that is best.
Posted by squirrelmama at 11:01 PM 4 comments:

The law enforcement angle is not, however, what is making Internet news and causing all those visitors' hits to the site. The drawing card is the appearance of a baby squirrel, popping in and out of her monumental mountain range of cleavage.

This squirrel-in-a-bra has become mother nature's answer to the jack-in-the-box.

To rehabbers, the reason behind the squirrel's mammary mansion is no secret. Women who care for wildlife and are blessed with hospitably sized bustlines often make use of these physiological nooks and crannies to keep infant wildlife warm, particularly if the baby is at an age when thermoregulation - the ability to maintain one's own body temperature - is still a challenge.

However, many rehabbers also practice a form of modesty and prudence - they may house the baby squirrel (or some other species there) but they don't let it all (and the squirrel) hang out. For one thing, it attracts attention. For another, the animal can fall out. It just isn't safe.

I cannot imagine what possessed this particular display except perhaps that the woman had no other place to leave the squirrel while she went in for interrogation.

Her heart was obviously in the right place. Unfortunately, in this instance, her squirrel was not.
Posted by squirrelmama at 9:14 AM 10 comments: