Sometimes on a bad morning, before I have a chance to remember, I still look for him. There in the rush of gray that greets me with its collective demand for pecans and walnuts, I wait for the eager, open face and the familiar drag of the crimped right front paw. 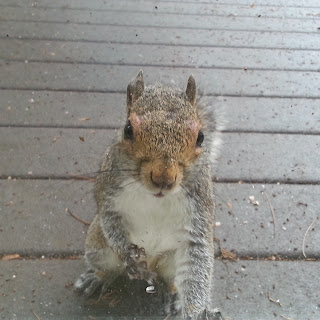 Ghastly as it was at first, the injury never seemed to hold the same significance for him as it did for me. In fact, few things stopped this squirrel in the year we shared beginning last spring, when he first showed up outside my sliding glass door. As-yet uninjured and enduringly photogenic, he captured me with his robust personality and the steadiness of his routine. Barely a month into our friendship, an encounter with a mystery predator left his right front paw permanently mangled and, for a time, infected and horrifically swollen. He kept his morning appointments and would sometimes add an afternoon encore. But he made it clear he wanted only my food, not my sympathy and most certainly not my help. 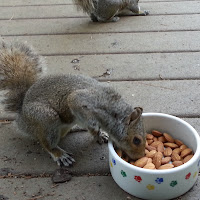 Then barely a week later, a new assault, one that left his richly bushed tail reduced to a half-torn flag waving in not-quite-surrender. The encounter had left the tail's disconnected remnant beneath a nestbox he'd called home for a short while in one of our maples. I scooped up the shard, placing it for safekeeping in a plastic bag, and sealed it.

I must have believed at the time this was how I could keep this independent spirit close forever.

And nothing slowed or stopped him. Not the blasting heat of that summer, not the subsequent superstorm of autumn, and not the battering of winter blizzards that escorted the arrival of 2013. As spring marked our full year of feedings and greetings, his wildness was softened slightly by his boldness: He would hang on the screen door, tap on the glass for me, or simply sit and stare in each morning – and wait. If he did not look for me, I would look for him. Somehow, we would find one another.

But for this tough survivor, it was always at a distance he perceived as safe. 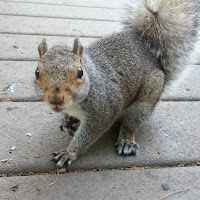 The head wound, when it appeared in late spring, was deceptive. The hair loss accompanying it mirrored the onset of mange, not uncommon among squirrels but not necessarily worrisome. He was, after all, not the only male squirrel sporting such patches, the hallmark of inter-squirrel squirmishes sparked by hormones in spring mating season. 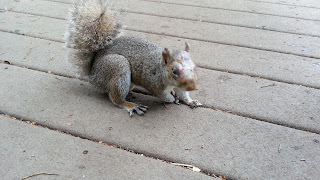 It did not take long for infection to rim his eyes with pus and collect in pockets that altered the sculpture of his head. On a Sunday morning, I presented him with an option and he took it: He stepped into the carrying cage - and into my foolish hope of being able to save him.

The freedom he lost that day was only designed to be short-term. By nightfall, mortality had rewritten that plan. After burying him a day later beneath our tallest evergreen, I locked the sliding glass door and turned my back on that insistent, inexorable parade of gray.

But they have proven to be the unstoppable ones, just as he had always been. Undaunted by a population diminished by one, committed to their own troublesome survival, they will not give up on the hope that their collective demands for food will always be filled. And so in their wisdom and their need to go forward into their lives, they have shown far more grace than I ever could.

It humbles me. I thank them for their patience and for the lesson.

I unlock the door and turn to face them again.
Posted by squirrelmama at 1:13 AM 8 comments: