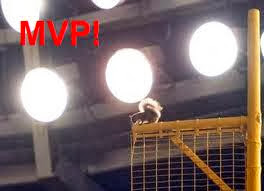 Sorry, but I hate baseball. The Great American Pastime is anything but that, in my eyes. Don't like it, don't understand it, don't even want to try. I'd rather watch cloud formations in the winter sky on a starless night.

So when photos began to show up recently depicting a squirrel at a New York Yankee game, sitting atop something known as the "right field foul pole" (whatever that is), I realized that there was, at last, some action at Yankee Stadium I could finally understand and even appreciate.

The fact that the squirrel stayed for the entire game (the Yankees were playing the Boston Red Sox), indicates that he either was so terrified he could not move or, perhaps he (or she) was a fan.

Knowing how spectators at sporting events can become unruly, rude and sometimes downright out of control, my worry, of course, was immediately for the squirrel. Would folks in the stands amuse themselves at the squirrel's expense, harassing him or throwing projectiles? Or would harm befall him in the form of a fierce pitch (or a hit) gone astray?

Fortunately, none of that happened. No matter which team the fans were rooting for on the field, almost all the fans seemed to be on the squirrel's side. Likewise, the media: the squirrel ultimately achieved as much exposure and and fame (or notoriety) as some of the rival teams' top players. In fact, the headlines in the local newspapers displayed the word "squirrel" in the same size type as that used for the names of the stars.

There were no reports about what the squirrel did after leaving the stadium, but I presume - well, I hope - he did so without incident.

I think in the game of baseball that's called being "safe," isn't it?
Posted by squirrelmama at 10:08 PM No comments:

Everyone, it seems, wants to talk about squirrels.

At a party last night, after we were done immersing ourselves in office politics and national politics, surfacing only to trash banks and the economy, the subject got around to the local squirrel population. And there were plenty of questions: "Are squirrels territorial?" "If you feed them separately will they stay out of your birdfeeders?" "Do they migrate?" "Are there really flying squirrels in this part of New York?"

The answer, of course, was yes - to all of them. There were stories people told of squirrels in their attics, stories of well-meaning rescues when nests fell and the babies in them got cold and could not be revived. There was a curiosity, and a true benevolence, as if people at this party were asking because they planned some travel to a foreign land sometime soon, and wanted to know more about the population they would meet there.

It's like that with squirrels, I suppose. You see them from afar. Then you have your first encounter, or read something about them, and begin to notice theirs is not a one-dimensional existence.

Suddenly you're entering that new territory and you don't want to be a tourist on the bus anymore, you want to be an active participant in the scene unfolding around you.

Squirrels, by virtue of their exuberance and their cleverness, can effect those kinds of changes. For those of us who get caught up in it, well, we're the lucky ones.
Posted by squirrelmama at 1:36 PM No comments:

At last, a squirrel adventure that doesn't involve mention of rabies, children and adults being attacked or power lines being bitten, casting metropolitan areas into darkness.

At last, squirrels can look cute again, for a little while.

The lastest news from Finland is that the squirrel who'd been entering a Helsinki supermarket on a regular basis for the sole purpose of stealing an egg-shaped European-made confection has been banned from the shop. Well duh. One would think this has less to do with the thief being a squirrel than with the thief simply being a thief. If the news had been that a truck driver was stopping in at the store and stealing these candies on a regular basis, the trucker would likely have been cast out from the supermarket too.

Banning the trucker would have been a sound business decision but no, it would not have made news.

But hey, this is a squirrel. A cute, furry being with a tail far bushier (and easier on the eyes) than one might find on your average trucker.

On the other hand, those of us who dispose of a large chunk of our very disposable income weekly purchasing walnuts, pecans, almonds and those pricey hazelnuts to keep the outdoor denizens content, outside our back door, find it no surprise - and hardly news at all - that a squirrel might actually have discriminating tastes. Discriminating enough to turn to a life of crime, breaking and entering at a supermarket and picking off only the highest quality brand-name confection.

Just ask the last visitor in our yard who repeatedly scoffed at English walnut halves and would not be appeased until $5-a-pound filberts were produced.
Posted by squirrelmama at 8:56 PM No comments:

The girls really wanted to go. It helps to know that.

This morning the last of the spring "babies" went home to their new lives in the trees, the lives that had been interrupted at some point in their babyhood, when they were brought into wildlife rehab care in the first place.

I always marvel at the way some of these soon-to-be-released squirrels perk up when they get their first whiff of the woods, as I tote them, in their little carrier, down the trail. And this pair positively perked up.

Even the most problematic part of releasing squirrels, the act of getting them out of the big outdoor pre-release pen, was too easy: They stepped willingly into the transport carrier, indifferent to the greens and corn I'd put there to tempt them. It was as if they sensed they were moving on to some next stage, something good.

So this ritual was more of a reunion for them and not a so-called "hard release." (I used to hate this form of release, which doesn't allow for a preferred day or two of adaptation to new surroundings. But I think when these releases are well-planned, done early in the day, and when the squirrels show they not only want it but need it, it's OK to give them their freedom this way.)

So I opened the hatch and these two went nicely and smoothly, didn't even look over their shoulders or look back with regret. They dug their noses and claws into the forest floor, then some tree bark, and were on their way. I suspect by now they are scouting out a nesting spot for the night.

My job is through.
Posted by squirrelmama at 1:22 PM No comments:

Angry, biting squirrels are in the news, particularly if they involve children being on the receiving end.

In Oklahoma, one newspaper reports that an 8-year-old boy was bitten by a squirrel that broke its leg after falling from a tree near a pond. The boy, of course, reached out to touch the injured animal - a definite no-no for anyone of any age.

In Denver, Arapahoe County health officials report that a squirrel that had apparently bitten a 3-year-old boy (they don't say under what circumstances) was being tested for diseases. To the newspaper's credit, it reported correctly that squirrels are not considered carriers of rabies.

Still, the media seem to savor the image of an angry, indignant rodent, typically weighing no more than 2 pounds, unleashing the fury of its finely sharpened choppers on human flesh, the younger and more tender the flesh the better. Seems to me the old "Man Bites Dog" headline may well be replaced soon by "Squirrel Bites Child" or "Squirrel Bites (Fill in Appropriate Description of Victim, the more helpless the better)." It has some of the same odd appeal that was present in the story two decades ago about then-U.S. President Jimmy Carter being set upon by a so-called "attack rabbit" - another small, furry creature acting way out of character.

Combative prey animal stories are only a few degrees better than endless reams about the antics of Paris Hilton or Lindsay Lohan but, seeing that we're almost in a presidential election year, can't we think of other issues to provoke the electorate?
Posted by squirrelmama at 11:12 PM No comments:

A different kind of calendar

If you care at all about squirrels here in the States, and follow their life cycles, you'll notice that autumn comes early. The so-called "fall baby season," the second season of eastern gray squirrel births, begins with the free-for-all of breeding that begins in earnest in mid-summer, culminating in births as early as late July.

By the squirrels' calendar, the end of July heralds autumn in New York, if not most of the northeast.

Leaves have not yet begun to drop from the trees but baby squirrels seem to make their way, precariously, to the ground in late summer, tossed out by weather, tree-cutters and, sadly, a mother squirrel who might ultimately know better than us well-meaning humans that not all of their offspring will be constitutionally strong enough to make it in this world.

It's a sad business for the finder, a wide-eyed rescuer full of excitement and hope, and sadder too for wildlife rehabilitators such as myself who receive these little bundles with an exhortation to please save them. But there are times we can do little more than bear witness to another small life form whose eyes will never open to see the world and who'll never do much more than feel the warmth and comfort of the artificial environment we give them for a few short weeks - or hours. For many, the script has already been written.

The world of squirrels is a world of contrasts for us humans. It's a time of urgency but it's also its own time warp. Autumn arrives in mid-summer and death seems to walk closely on the heels of every new birth.
Posted by squirrelmama at 10:42 PM No comments: 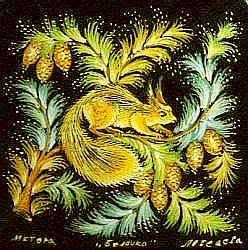 Ratatosk is a minor celebrity in Norse mythology. A kind of rodent precursor to our modern e-mails and chatrooms, this tiny red squirrel is said to have carried messages (including the gossip of the day) from the top of a giant tree, back down to its sprawling roots.

The treetop recipient, according to Norse lore, was an eagle.
Down below, the story goes, was a dragon.

Today Ratatosk might employ a blog like this, skirting a modern day, electronic pathway, at speeds his Norse creators could never have envisioned.

Across the Pond we scurry with word of squirrels making headlines in the news - or raising eyebrows locally - all the while advocating for a kinder demeanor toward all living creatures, and sharing in the natural whimsy and spirit these diminutive prey animals show in their daily lives.

This is a blog from us, to you.
Ratatosk, we hope, would take it as a compliment.
Posted by squirrelmama at 9:12 PM 3 comments: