Now is the winter of our discontent.

Or at least of our discord. 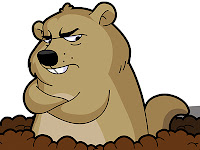 The extended frigid season doesn’t stand a shadow of a chance of lasting too long, according to predictions delivered today in Punxsutawney, Pa.

Phil, the nation’s official groundhog has spoken – if not in the traditional verbal sense, at least through his body language. Neither he nor urban cousin Staten Island Chuck glimpsed the outline of their sleepy, corpulent forms lurking in the shadows beneath the glare of national publicity.

On Long Island, however, Malverne Mel and Holtsville Hal beg to differ – and trust me, groundhogs don’t take an especially sanguine approach to begging. Thrust from their cozy, frostbound snoozes into the spotlight of our selfish curiousity, the suburban pair saw no climate change, at least not for at least six more weeks.

Groundhogs don’t have their acts together this year, and that’s a bit disconcerting. Lack of such species consensus can readily lead into more dangerous territory: Imagine soon a split among their ranks, for instance, into Republicans and Democrats. (We already know those parties don’t see eye-to-eye on anything, especially climate change.) From there it could lead to a religious uprising, with fundamentalist and New Age groundhogs debating the merits of prognostication, hibernation and even eternal damnation.

So let’s hope for an intervention – and fast. Some kind of mediator should be able to help the groundhogs get their acts together again.

Frankly, the alternative leaves us cold.
Posted by squirrelmama at 12:21 PM 1 comment: