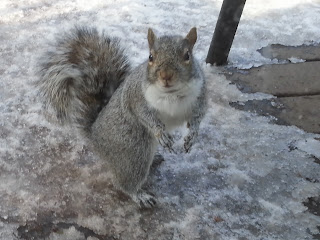 Do you believe in Santa?

We're not talking red-suited corpulent elf, the cold-weather one-day-a-year laborer who, during the rest of the year, is the biggest slacker on the planet. The nation has so many of those, anyway, it's impossible NOT to believe.

No, this Santa is diminutive, gray-suited and only a wee bit elfin. He's a nut-hoarding, tree-climbing, butt-shaking, tooth-chattering, foot-stomping Santa.

OK, so he's a squirrel. But he's still Santa. 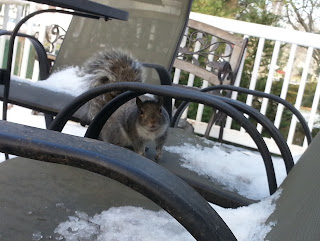 And you'd better believe because this Santa's not coming to town: He's already been here a few days. And he shows no sign of letting up. Barely a week before Christmas, right after the northeast's first serious snowfall, Santa landed - first on the rooftop and then on the deck - with barely a clatter (and without any apologies whatsoever to Clement Clarke Moore).

Santa, who carried no luggage with him, wanted what was in our sack instead: Pecans, on this particular day. He showed up the next day wanting what was in our sack again: Almonds, this time, were the nuts du jour. There was no red cap on his head, but below his chin, and just above his chest, was the slightest suggestion of beard: White, fluffy and oh-so-jolly. 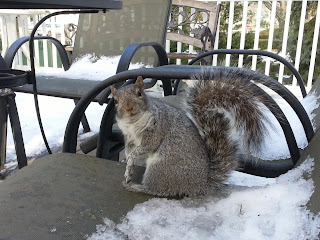 In fact, three days into his visits, I thought I could hear him, in fluent squirrel, singing this carol: "Silent nut, holy nut, all is calm, fill my gut."

Fortunately, Santa stayed away from our chimney and fireplace. There is an animal cap up there anyway, so it's Santa-proofed for Santas of every size, shape and species. Besides, chestnuts roasting on an open fire didn't fit his agenda. 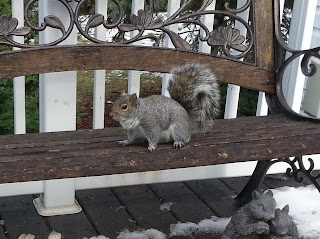 Not all squirrels resemble Santa - this is a first for us. And it is something of a Christmas miracle. Whether whether Santa is here for the 12 days of Christmas and into the New Year, or just sticking around for the annual winter breeding season remains is a mystery. But if he is just here to deliver a different kind of Christmas present - in the form of baby squirrels to our resident females - I sure hope Mrs. Claus doesn't find out: Too much ho-ho-ho'ing around, and there's likely to be tough sledding ahead for Santa.

Santa arrives in many forms, as we well know.....!

There's so much happiness to be found in the noticing of a jolly, bearded squirrel

Long live Santa Squirrel! I believe and so does Queen Ozette!

Another brilliant posting on your blog! And especially one of good cheer for the holiday season.

Of course, I like to think that beards are always in style, for Santa or, even, Robin Hood, in the squirrel mode of being happy to receive no matter the time of year.