Squirrels, a secret weapon no more

For those of us who know the inner workings of squirrels - and yes, there are more than a few of us out there - it should be no surprise that one day this headline would appear in the news: 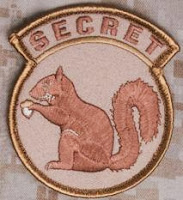 This version of the North Charleson, S.C., domestic dispute, allegedly aided and abetted by remarkable violence involving rodent statuary, appeared on the WCSC-TV website, as well as on a San Francisco-based news website, and locales even further afield. The world is now nonplussed by what personal harm can come from the possession of an otherwise unassuming rodent figurine.

It seems, friends, the secret is out: Squirrels are, indeed, lethal weapons. In fact, now it is only a matter of time before the U.S. Bureau of Tobacco, Alcohol and Firearms will require squirrels to register their incisors, claws and other body parts. They will be heavily taxed for possessing them and then will have to cough up the acorns annually for renewing the annual permits. Even their bushy tail, by no stretch of the imagination, might qualify as "camouflage" - another tool of battle - falling under the same weaponry regulations, particularly in times of war.

In this one case, the battlefield was confined to the couple's South Carolina home where, according to police quoted in the local news report, the wife, upon discovering her husband had failed to bring home beer on his shopping trip, "hit the victim over the head with a ceramic squirrel, and stabbed him in the inventory of Bud Light and had sent her husband out in search of a few refills. What role the squirrel had in all this remains for the Grand Jury to determine).

Although no live squirrels were implicated as accessories, wild woodland creatures will nonetheless be shocked to learn of the federal licensing process that may take effect, in a hastily drafted emergency resolution, on Jan. 1, 2014. Law-abiding citizens of the forest and the suburbs who have been squirrelling away their larder for the long winter may now find their nut stash depleted by hefty permit fees. And since this declaration comes at the start of breeding season in some parts of the country, it may also put a cork in some libidos, since squirrels will likely no longer be able to afford litters of 5 or 6. (Admittedly, the babies would be issued "learner's permits" since claws and teeth do not emerge until a few weeks after birth. But clearly the cost of raising a litter in this country will now rise exponentially, forcing some squirrels to rely even more on public handouts). 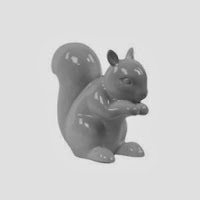 As for us humans, the broader question is this: What will become of those of us who not only know the inner workings of squirrels but also possess abundant likenesses of them in plush toy form, carved wood, fabric and yes, even that most lethal ceramic form? Will we collectors now be subjected to a massive direct-mail campaign to join the NRA (National Rodent Artillery)? Will our vehicles be forced to sport bumper stickers that say "I'm the NRA and I Vote?"

Squirrels haven't been so feared for their military savvy since the capture in 2007 on the Iranian border of 14 squirrels outfitted with espionage equipment. The squirrels were arrested and accused of spying for Western interests.

Consider this, friends. We may have to consider a stealth strategy from this point forward if we all want to keep our squirrelabilia collections and the squirrels want to keep their dignity and their families. We may all end up having to join the underground.

Toward that end, hope is barely more than a month away: On Groundhog Day, all eyes will be on the king of that underground. We may find a ringleader in Punxsutawney Phil. When it comes to the threat of being shadowed, Phil's the pro we need.
Posted by squirrelmama at 2:55 PM

I enjoyed the post! You might enjoy a novel I wrote, The Pixel Eye, in which living squirrels are literally used as weapons.

Hi Paul, checked your book out on amazon and I believe you're right.....will put this on my list. The premise has some reality to it already as I believe Squirrel Surveillance has already been practiced in the Mideast with mixed consequences. Just one question: seeing as I do love and care for the little guys, is this a book for the rodent-loving faint of heart such as I am? I admit the story has me hooked already .....

Hi Paul, checked your book out on amazon and I believe you're right.....will put this on my list. The premise has some reality to it already as I believe Squirrel Surveillance has already been practiced in the Mideast with mixed consequences. Just one question: seeing as I do love and care for the little guys, is this a book for the rodent-loving faint of heart such as I am? I admit the story has me hooked already .....