Starbucks, the coffee giant often criticized for the twin sins of presenting jet fuel under the guise of java - and then pricing it like jet fuel anyway - can be proud that it struts some Squirrel Spirit.

That's right: Starbucks is channeling its inner rodent. Something positively bushytailed, and unquestionably bright-eyed, has been happening at baristas' drive-through windows around the region - perhaps the country: Motorists are pulling up to take delivery of their orders and discovering that the previous driver has already paid their tab. Inspired to reciprocity, these drivers are, in turn, extending the same courtesy to the car in line behind them. 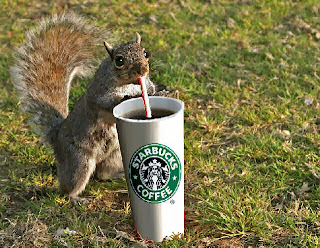 They are paying it forward by paying it backward.

Starbucks customers are simply discovering the selfless gesture that squirrels have engaged in for millenia: If you bury a small acorn and then walk away, it will still have been a worthwhile effort, because someone is bound to come along, dig it up and enjoy it. (Smartypants that they are, squirrels are also wise to the fact that it is easier to unearth a well-buried seed of an oak tree than to try and excavate a Mocha Frappuccino Grande decked in whipped cream. With all that dirt flying, there's always the risk of ending up with too much ground in one's grounds.)

Think of this Starbucks phenomenon, then, as humans learning to Pay the Acorn Forward; the hazelnut here may be the flavor of a hand-crafted, blended Frappuccino beverage in a tall glass instead but what's going on here still constitutes the seed of a grand idea. Though squirrels rarely enjoy a reputation for altruistic acts, and even less of a reputation for being baristas with a social conscience, the fact remains that most nuts buried by one squirrel have a pretty decent chance of being consumed by another. Or, if left untouched for an extended period of time, those nuts producing an even greater gift to the world: a forest!

Who says squirrels don't have a giving spirit?

So let the Starbucks customers continue to dig down deep - into their pockets as well as their hearts - and unearth the kernel of kindness, Squirrel Style. It seems the idea isn't nuts, after all.
Posted by squirrelmama at 12:19 PM

Where is the "Love" button for this piece? Love it! But then, I love squirrels and I love Starbucks, so what's not to like. :)

Ha! You show the cleverest squirrels!