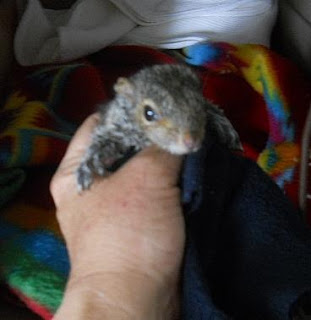 His only crime was that he was born a baby squirrel. Being wild, helpless, orphaned and alone were reasons enough for him to be cruelly targeted.

In the eyes of those who would willfully hurt animals and need any justification at all, another's innocence and defenselessness will often suffice. The little squirrel possessed both traits and, because of that, was doomed at his assailants' hands and at the mercy of their feet.

Judged guilty of his crime, the squirrel was sentenced: And so it began, the prodding, the badgering, the kicking. These predators, overwhelmingly larger than the few ounces they sought to destroy, were little more than youngsters themselves: Human children engaged in an act, not borne of indifference but deliberate cruelty.

But he is alive today. One person stood between this baby and certain slow death. An observant rescuer stopped to save him - one small squirrel in a vast, busy city - and his rescuer found someone who could harbor him and heal him. 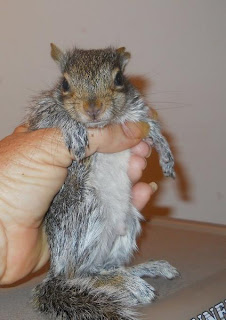 And now Luca - so named by the New York City wildlife rehabilitator who took him in and is helping his battered body recover - is safe.

It is a privilege to read the story of his rescue and recovery since then, as told through social media such as Facebook. One look into his bright eyes, as seen in the earliest photos his loving caretaker has shared, says he is not ready to give up on the world, even though he fell into it long before he was equipped to meet its challenges. One look into his bright eyes says he is ready to meet those challenges now because he is not doing it alone. He has someone in his corner and he can get down to the business of being a baby squirrel again.

His body is healing but his spirit - you can see it in his eyes - never once suffered from those deadly blows.

If wanting to be alive, even in a cruel world, is indeed a crime, then perhaps Luca is guilty of something after all. But then so are we, the ones who lift up their bruised bodies, cradle them gently in our palms, then help them get on with their lives.
Posted by squirrelmama at 3:01 PM

Not to the take away from the heinous nature of this crime, I strangely feel sorry for the perpetrators of this crime as well. What happened in their lives that something life this would pass for entertainment? That inflicting such pain on a helpless defenseless being would be something they were attracted to? Either they are mentally unbalanced, themselves abused.. or just evil...

Yes unfortunately this is probably a double tragedy, and the human side of it is hidden - only visible indirectly through this horrible act against little Luca. I have no doubt you are right.

I am Luca's mamma now, the licensed rehabilitator who took him from his rescuer. Caryn, your words describe him and his little spirit perfectly. To those who wonder what happened in the lives of those 'children' who took delight in torturing him, I have a three word answer: Grand Theft Auto, and similar 'games'. Kick a woman to death in a video game, then go outside with your pals and try it on a helpless baby animal.

It takes a strong constitution, nerves of steel, and so much heart to do what you do, most especially in the face of this kind of savagery. It also takes a rare combination of extra gentleness and some necessary toughness, just to get through it all emotionally, while caring for him. You know he would never have had a chance without you. As some video games (and movies) and other soul-numbing activities continue to inure people to suffering - or causing suffering - we are all blessed to have someone like you to keep it real, and protect those who suffer, even if it is at the expense of tears. In the end it will be worth it. I am sure Luca would agree, tenfold. :-)

I wish peopele were not so cruel, sad that they are so young.
Blessings to Luca and his new parents. He obviously has a strong and forgiving spirit.

What a moving story, both what happened and how well you tell it.

What a moving story, both what happened and how you told it.

People can be cruel. I am glad someone stepped in to help this poor baby.

Thank you for helping this poor animal. You do have a good heart.
Silke

Silke, I am pleased to personally know the rehabber who is caring for Luca, and yes, she is doing the work of an angel. I hope he grows strong and healthy and goes on to have a full life!

There's a special place in the Heart of the Universe for the rehabbers, the rescuers and the bloggers who make stories like this possible and so positive. It's encouraging to know that you are here and it renews my hope for humanity. Thank you all.

It pained me so, dogsleder, when I heard my friend talk about Luca, I had to write his story for others to see. Fortunately this tale is going to have a wonderfully happy ending. Thanks for visiting and reading about him.

A message for all the good souls who commented here, and of course the author of this blog who writes so poignant and true: Luca is free in the trees. He never looked back and he went up, up, up as high as he could go into the glorious green world above him. He is one with that world now...I can no longer even distinguish them from his wild-born friends. Be a good squirrel, sweetest boy! Mamma loves you and will never forget.

None of us could ever forget his story - or him. Thank you for an update that would make any heart sing. God bless.