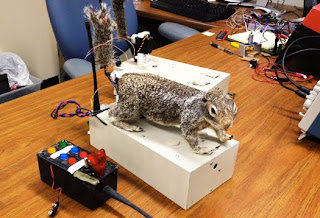 He is our nation's Next Big Action Hero.

Envision Bruce Willis with a bushy tail (or with any hair, for that matter).

Or how about Arnold Schwarzenegger, minus the sex scandals.

Meet RoboSquirrel, fearless defender of the free world - his free world, that is, which likely consists of his family and their well-hoarded, well-guarded stash of eats.

Scientists have long been mesmerized by western squirrels' talents at standing up successfully in the face of fear, when fear is named "rattlesnake" and wields a venomous bite. In such encounters, however, adult squirrels, it seems, just don't get rattled.

In an attempt to decode their successful military strategy, researchers at UC Davis built a robotic squirrel - think "Squirrminator" - pre-programmed his tail to take remote commands, replicating the real thing's responses witnessed in nature. Then they released him into the wild (as all good squirrels must someday be, even robotic ones.)

Unlike the real thing, these robosquirrels could now do two important things on demand: wave their semaphore-like tails in a pre-arranged pattern responding to danger, and raise those same tails' temperature, as needed, to put some extra heat on any standoff with a snake.

Researchers have come to believe that the heat does the trick more than anything else, leaving the snake to slither away with his tail tucked between....well, whatever snakes have.

Squirrels can already leap tall buildings in a single bound - or at least a tree of that architecture's equivalent size - so getting a scaly ground-dweller to back off in the dirt seems, by comparison, a walk in the park, or perhaps a slink in the woods.

Still, scientists are impressed. They say this infrared communication is far more subtle and sophisticated than anyone could have imagined. Yes, it's the same kind of infrared we sometimes use for connectivity between our printers, our hand-held computers and our other geek toys. But let us state, for the record, the squirrels had it first. Not Apple. Not Microsoft. Not Hewlett-Packard. No doubt the squirrels are already gnashing their incisors, working on the next major version of Bluetooth.

Worry not, their hard work on this development will not be compromised by any security leaks to the media. Not even the scientists at UC Davis are getting a peek at this. RoboSquirrel is standing guard, keeping these secrets safe from any corporate vipers and others who might rattle and tattle.
Posted by squirrelmama at 2:01 PM

You've outdone yourself, once again! "Squirrminator" is one of your better coinages!
Your blog is a treat for the squirrel-minded (and rodents everywhere)!

Thanks so much for the kind words, Chet!! I can't wait for "RoboSquirrel, the Movie," can you???

Haha, this is very interesting. As you can see, I love squirrels. owo I have been wondering- do you rehabilitate squirrels? Just curious.

Hi Squirrel, thanks for stopping by. Yes I have been a licensed rehabilitator since the mid-90s, though I'm trying to take it a little easier these days, the work is tiring and challenging. But the rewards are GREAT. Glad you are also a squirrel-lover! We need more like you in this world!!!! :-)