Wisdom of the ancients 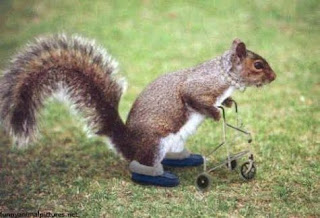 For one thing, you won't find many 30,000-year-olds at your back door begging for nuts. But even if you did, would you deny him (or her) the luxury of a pecan? Many of us have been raised to venerate the old and presumably wise. So if we could, we would honor this rodent who has been transformed by the passage of time into a treasured rarity. We would readily open our hearts, our back doors and our nut stashes: After all, any squirrel who has been begging for handouts successfully for several millenia is surely, by now, a seasoned and polished pro at the game.

But there are other reasons to celebrate Grandpa, who in this case, was most likely a ground squirrel. This elder statesman is not the same creature as Scrat, Hollywood's "Ice Age" film protagonist who is, by all accounts, a thief of hearts as well as hazelnuts. Grandpa is no player in an animated cartoon - he is instead the centerpiece of an article in a scholarly journal, Nature, which broke big news in the squirrel world with the recent headline: "Wild flower blooms again after 30,000 years on ice: Fruits hoarded by ancient ground squirrels give new life to prehistoric plants."

OK so the headline isn't exactly tabloid fodder. There's no bitter divorce with allegations of nut-cache thievery or squabbling over who gets custody of the walnuts. There's no ugly, name-calling chatter that ends up on reality shows or the evening news.

This is, however, a story about a rare gift - legacy from long ago that we modern humans can enjoy, thanks to squirrels. A plant that thrived on the mammoth steppe of Siberia has supposedly been brought back from the dead, or at least from a very long sleep deep in the permafrost, by scientists who unearthed seeds and fruits that had been buried there about 30,000 years ago by ground squirrels. With great care, the scientists harvested placental tissue from these plants and gently cultivated it in a laboratory setting until shoots came into being.

An earlier attempt to grow the actual seeds themselves failed when the seeds died shortly after germination. The laboratory plants, however, did grow and mature from the placental tissue and eventually produced fertile seeds - and a second generation of plants.

Why should we even care? Because this long-ago link to our planet's Ice Age roots begins in these seeds. It's a gift from these small rodents who populated our planet hundreds of thousands of years ago, doing just what squirrels do now - they gathered and buried their food. Squirrels have given us yet another link to our planet's beginnings.

You may not be able to personally thank a 30,000-year-old squirrel for this thriving collective of laboratory plants that holds secrets to our origins. But you can be a little nicer when there's a scratch at your back door - and a hungry-looking pair of eyes meets your gaze.
Posted by squirrelmama at 11:16 AM

Thanks for sharing this amazing fact. More reason for loving the little fur balls but then you know that you are speaking to the converted here.

Always happy to speak to the converted!!! We need to stick together and advocate for these guys who are, in the long run, anything but "pests."

Squirrelmama, I've been observing pigeons from my window. I watch them very intently. And they use my house as a good playground. The wake me up in the mornings. On rare occasions they've even stepped on me inadvertently, when I'd be covered head to toe with a blanket.

But I don't let them build nests or take rest inside. They create a lot of filth. This morning, I had to throw out a nest (with an egg in it) to the utter dismay of the pigeon-couple. They really looked puzzled. Made me sad to see them searching...

Siddharth, it's tough to see them struggling out there, just trying to live their lives....and yes, they do make a mess. I just wish there were more space on this planet for all of us to coexist without so much of the unnecessary crowding. I love birds too, they have wonderful charm.

Thank you for the facts around the good work of a 30,000-year-ago squirrel, no doubt building for a better future. Doubtlessly, there are squirrels elsewhere ensuring that life will continue after (all too many) humans finish messing up.