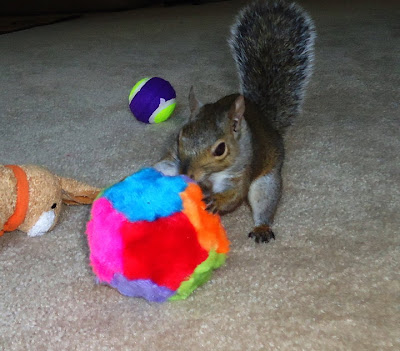 This is Hammy, who, I'm told, would rather play soccer the conventional way than with acorns like the rest of his species. Hammy has thus been in training all year for his chosen sport.

Sadly, he did not make it to Johannesburg, South Africa for the football finals today, nor did he qualify to be part of Spain's team - which emerged the victor, despite the absence of his talents.

Besides, Hammy is not from Spain - he lives in Florida.

But Hammy will definitely be a contender in next year's Skwerl'd Cup when it is covered by ESPN (the Extraordinary Squirrel People's Network). Squirrels are, after all, naturals in this game:

They are terrific at faking out their opponents - recent news reports indicate they bury, dig up and then rebury the same nut as a way of deterring thievery by competitors.

Squirrels are also known for keeping their eye on the goal. And in this case the goal, most of the time, is FOOD.

And finally, squirrels refuse to be distracted by the mating call of the vuvuzela, whose ill-gotten cacophonies still have many humans' eardrums recovering from Post-Traumatic Stress.

It still isn't clear what a team of squirrels might do if they gained possession of the 18-karat gold trophy, which is a finely detailed sculpture depicting people standing beneath Planet Earth, holding it up. But keep your eye out for a revision of the time-honored design, with the new version sporting a few enterprising bushytails hoisting - and raiding - a gigantic feeder stuffed beyond capacity with birdseed.

Let's raise our cups to Hammy the champ!!!

Hammy makes soccer worth watching, for sure!!

A wonderful skwerl take on the World Cup! By coincidence, Hammy might be interested in the fact that my latest post is entitled "Ham on Air".

May I ask how you keep your squirrel indoors on a rug without it pooping and peeing all over the place. We have outdoor rug on our back porch and we regularly have to steam clean it because of the squirrel pee.
althovio@gmail.com

Violet, For the answer to that very good question - and in the interest of saving good carpeting - I am going to ask Hammy's caretaker to address this question. Watch this space for her response!

Violet, Hammy is a very clean squirrel! He has only a few places where he 'wee's ' (just outside his sleeping area, on a shelf in his cage, and a spot near where he plays most of the day) I keep small carpet samples - he seems to like the texture :P -for those areas and regularly spot clean and finally replace them. He has never soiled the house rugs.....it may be that your squirrels have chosen your back porch rug as their 'special' place!