The squirrel as Christmas hero! 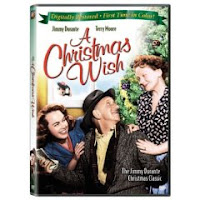 In the 1950 movie, "A Christmas Wish," a squirrel named Rupert steals the show - if not the entire holiday for one struggling family. In fact, the original title of this old black and white film was "The Great Rupert," and features a trained, performing squirrel (magic achieved through Hollywood puppetry, in this case).

Jimmy Durante (remember him?) is the head of a family down on its luck until the discovery of this little squirrel changes that luck - and their lives.

Rupert the squirrel isn't likely to unseat Santa from his throne (or his sleigh) as a holiday icon, and no carols have been written about him in the more than 40 years since the film was released, but since receiving a copy of this movie two years ago as a gift, Rupert the squirrel is now part of my Christmas treasure chest.
Posted by squirrelmama at 10:41 PM