Squirrels, the first to Twerk 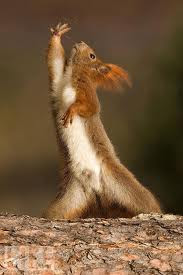 The squirrels are up there in the trees and they're twerking. Unlike Miley Cyrus, they don't need a duet with Robin Thicke or the hot, sweaty glare of the VMA's cameras to get them going. Squirrels are naturals at twerking. It's a little-known fact that squirrels were the first to twerk, and were going at it long before the Dawn of Man. In fact, even after humans conceived of the Electric Slide or even the Twist and proclaimed it cool, squirrels had perfected the well-executed twerk, shaking that bushytailed booty and turning "twerk" from an action verb to an action hero!

Sadly the squirrels never trademarked those early rodent gyrations or hired an agent or even an entertainment lawyer, or they wouldn't still be in the parks today, begging for handouts. The squirrels would OWN
the parks! And we'd be ones begging: "Twerk it again, Sam. Play 'Misty' for me and add some twerk, would you, for old time's sake?" 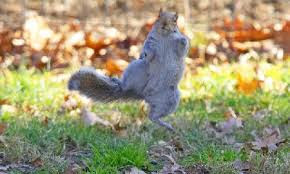 But squirrels are, after all, pragmatic creatures. Twerking the old-fashioned way might have accomplished a great caloric burn - all that rump-rotation doesn't come easy, after all - but it is largely a nonproductive enterprise. Enter Darwin's little-known theory, Survival of the Twerkiest: Squirrels, through the years, have thus refined the not-so-gentle art of the twerk, moving the critical focal point of the grinding action from posterior to anterior.
Now the squirrels' most impressive nonstop gyration occurs between their teeth.

Tooth-twerking is hot - but it's not easy on the incisors.

Still, at least the end result is something tangible. Or, more accurately, edible. Squirrels have actually transformed twerking into an agribusiness, and they are the captains of their industry. Where music once celebrated the Sultans of Swing, rodentdom pays homage to these Titans of Twerk. 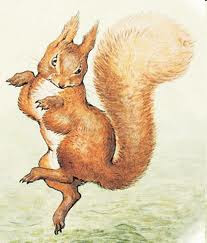 Human twerkers just don't seem to get this. They still haven't stopped twerking their bottoms long enough to sit down on those same seat cushions and ruminate upon the relative uselessness of their otherwise lazy rumps. It is time to evolve, from the bottom up. Squirrels may not win any VMA awards before music fans and TV audiences, but they're ahead of the game when it comes to the economy of effort expended. They're not lazy. They know you have to move it to groove it and, as such, they have become the twerkmasters of the universe.

As for the humans still mindlessly grinding away at it, the old-fashioned way - just remember that in the squirrels' eyes, this form of the twerk has simply bottomed out.
Posted by squirrelmama at 4:13 PM

Thank you so much PJ!!! I don't think I'll ever look at squirrels' motions in quite the same way anymoe.

Thank you so much PJ!!! I don't think I'll ever look at squirrels' motions in quite the same way anymoe.

Indeed humans sadly do twerking an injustice and should study the fine art awhile before accosting the rest of humanity by studying our fine friends that make it look effortless and definitely more tasteful. No finesse my humans....we need to do more park studies and less screen time.

I am totally with you on that! More park studies and absolutely less (or no!!) screen time.

LOL! Funny post! Our squirrels are pretty good at pole dancing too.

Pole dancing for sure! I wonder what's next: ZUMBA?