The land of the free? 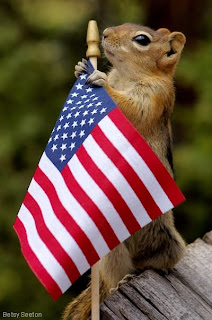 In the solitary lifestyle of the eastern gray squirrel, there are no united states. For these proud separatists, independent living defines the American way. And so, flaunting such solitude, these squirrels wave their patriotism with every defiant flick of their lush tails.

These colonies populate the scattered rock outcrops of the American West, as well as the nation's expansive prairie.

This is America, after all, where colonists and rugged individualists together have made our nation what it is: the land of the free and the home of the wild. They are free to live - but not free to live without threat of extermination. Theirs is a collective cry - not against taxation but annihilation. Solitary or colonial, they are all sought for gassing, poisoning, hunting and trapping.

As our country celebrates the rights its human citizens won not quite three centuries ago, let us not forget the rights of the small and helpless who share our hard-won land.

Freedom is not truly freedom unless such independence belongs to us all.
Posted by squirrelmama at 5:43 PM

A timely and powerful message ...

For your contributions to the cause of cute rodent freedom, please accept an award waiting for you over at the Realm of the Lone Grey Squirrel.

Wow, I thank you LGS, I'll head over there and have a look!