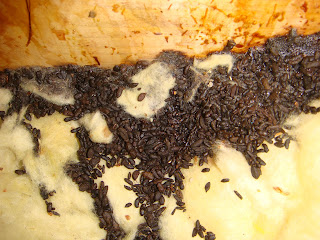 Much has been written in the last few weeks about the power of flying squirrel poop - not so much as a lethal projectile from overhead, but as a healer of pain and an aid in blood disorders.

That's right: When it comes to medicinal value, squirrel excrement is excellent. These tiny cast-off nuggets are good as gold, even if their color isn't quite the 14-karat variety.

Squirrel feces in medicine is hardly a New Age notion. This concept of incorporating the tiny flyers' output into beneficial remedies, often through tea-like infusions, dates back thousands of years in traditional Chinese medicine, and it is still being taught at the Pacific College of Oriental Medicine in New York. This healing discipline also embraces the output from numerous other terrestrial and arboreal beings (but no doubt the flyers are among the cutest to be pooping for the cause).

Thousands of years of healing power makes for some pretty old poop, for sure. But can America's health care system change to embrace this old-time practice? Will the federal government soon subsidize outhouses for flyers, to facilitate collection of palliative ingredients?

And will these tiny nocturnal rodents soon hang out their shingles, keeping office hours at night, accepting acorns as copayments??

Indeed, our nation's widespread and costly addiction to painkillers could soon be remedied by requiring that all addicts in treatment maintain a colony of flyers who dispense natural analgesics out their back ends. There are, after all, worse things in life than a dependency on squirrels moving their bowels.

Australia, it seems, has already gotten with the program. A June 29 report in The Daily Telegraph heralds the celebrated arrival of such feces in that South Pacific Nation (which has no native flyers of its own). "Quarantine officials have given the green light to therapeutic poo imports, meaning animal dung could be coming to a shop near you," the report announced to its Australian readership.

Open-mindedness to change is a good thing, even if change is something that takes us back thousands of years instead of moving us forward.

And a light-hearted approach to it all can't hurt either. Because laughter is good medicine, too.

So don't be that quick to pooh-pooh. Let's leave that to the flyers.
Posted by squirrelmama at 10:28 AM