His life began, as it does for all squirrels, in darkness. But when the critical 4-week period of his development arrived, bringing the promise of that welcome fifth sense, there was no sunlight to greet him: He'd been born without the eyes that would have let the world in. 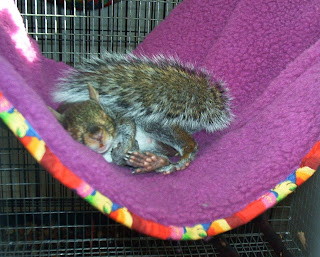 The squirrel's rescue was the stuff of myths. We found this small creature ourselves, a gray body rolling about in the midst of traffic on a busy road one early evening in 2002. When we scooped him up, dodging traffic all the while, we discovered he was mysteriously unscathed. His skin betrayed not a single scratch, he harbored not a single flea. He appeared a picture-perfect juvenile of about 15 or 16 weeks, well past the weaning stage. He was, quite possibly, a squirrel of newfound independence from the birth nest.

Except for those eyes. The eyes that weren't.

How a squirrel denied vision could have made it this far - then made it to the center of a well-trafficked thoroughfare - will forever remain a mystery to us. Perhaps even to this squirrel, who was given the name Stevie Wonder. He was, in every way, a wonder - and more.

Our job, as rehabilitators, is not to keep, to collect nor to cage what is rightfully nature's. Our job is to give back, to restore, to make whole again. With Stevie Wonder, this was not possible. A veterinarian's exam confirmed that his eyes had never - and would never - develop. And so this gentle being learned to navigate a vastly narrower world, find joy in food, toys and such simple creature comforts as a hammock.

Ten years passed. A decade borrowed from beneath the crushing wheels of a car can be a gift. And so it was.

We can be certain of two truths central to the work of wildlife rehabilitation: The animals you raise are going to die. They will either die in your care or, someday, out there in the trees, well beyond your care and beyond your own field of vision. Perhaps these are things we are not meant to see.

But still, there are some things we hope to gaze upon: A few days ago, a young male and female squirrel left our care, ecstatically free as they ran out into the sunlit woods, released into the lifetime of wholeness they were born to seek.

That same week, Stevie Wonder took his leave of us. This, however, was a goodbye we had neither planned nor expected. An elderly squirrel, he slipped from the confinement of his sightless body and found his way to his own moment of release.

His life ended as it had begun - in darkness. Shortly before midnight he returned to nature, and the world he never saw made him whole again.
Posted by squirrelmama at 1:41 AM

A fitting tribute to a special friend...

Caryn, your words are so perfectly chosen, and your phrases so perfectly crafted. I can't get enough of your beautiful writing. I am SO glad you choose to write about rehabilitation, and squirrels! You are a gift to all of us in this rescue business. I know Stevie Wonder must have had the most beautiful life with you.

Those ten years must have been very precious and joyful. Run free, Stevie.

A beautiful tribute to a tiny miracle! Run free Stevie!

A beautiful tribute to a tiny miracle! Run free Stevie!

What a story! It boggles my mind how Stevie managed to survive his first weeks. Mother Nature must had protected him. Thank you for the love and the affection you gave him. All squirrels deserve the best. Viva squirrels !!

I don't think I know you, but I feel compelled to post because I also have a squirrel with the same condition (called "microphthalmia"), and I, perhaps not-so-ironically, named him "Stevie Wonder." If you care to see his progress, this is a link to my website. http://www.squirrelrehabilitation.com/forum/viewtopic.php?f=5&t=34. Your story brought me to tears, and I know my Stevie will receive all the love and care yours did and, I hope, will live as long and happy and healthy a life! Thank you for sharing. This is the fifth squirrel I have been aware of with this condition, and although I haven't read anything about squirrels specifically, It's my understanding that in other species it could be caused by the pollutants we keep dumping in the environment.

Jack, I will most certainly visit your website and have a look at Stevie. Oddly enough I have only heard of this condition in squirrels in one other instance - some years ago - and in this case, the squirrel not only had underdeveloped eyes but I believe a heart condition as well. I don't doubt there is some environmental cause that has tinkered with squirrel genetics. We humans have messed with so many species on this planet (including ourselves). I am glad your own little Stevie is in such good care and I hope he will thrive, live long and enjoy his life. Your comments here have meant a great deal to me.

What an amazing little animal, and a wonderful life you gave him

I'm sorry for your loss. I know that he had a full and loving life. Thank you for make the world of difference.

There is a book about a black cat who was born with no eyes. Aren't these just amazing creatures?? I loved reading these and I was, too, brought to tears. Thank you for sharing!