Plumb out of answers 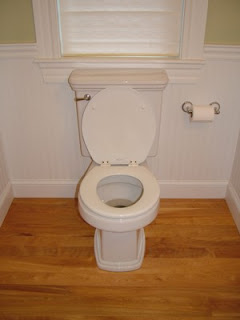 In fact, Channel 10, WIS-TV, broadcast a report about one local homeowner, Rose Strohman-Morris, of the town of North, who discovered one such bushytail getting down and dirty hanging out in her plumbing just this week.

Oddly enough, according to the report, she is not the only resident who has reported rodents in their restroom. The town's mayor, Earl Jeffcoat, is quoted by the TV station as calling this mini-invasion "a nuisance."

The locals attribute it to the overpopulation of squirrels. But that seems, to say the least, an oversimplification. And there have been reports of this happening before, in other locales: In March 2011, in Malawi. In Oklahoma, in 2010. And in 2008, in Canada, when it was a flying squirrel that landed down under the lid.

Squirrels are tree dwellers, not potty animals. It's unlikely they actively seek out homeowners' bidets and bowls in the hopes of scoring a big nut cache.

And a toilet is hardly an ideal receptacle for anything you wish to store for the long haul.

Clearly, the squirrels are there as uninvited guests: Those with standing offers to come to dinner or perhaps Sunday brunch are more likely to make their entrance through the front or side door, wiping their paws delicately first on the welcome mat.

A toilet is the last place you'd drop into as a guest of honor.

How the squirrels ended up in some folks' pipes and bowls is anyone's guess at this point but it's clear if the squirrels had any choice in the matter, they'd hightail (or bushytail) it out of there, especially if they knew what they were getting into, in the first place.

Fortunately, making use of an improvised catchpole of sorts, Strohman-Morris was able to clear the living clog safely from her bowl, taking him outside, thus saving a life and leaving the toilet free for its somewhat earthier mission.

You can bet the squirrel wasn't the only one who immediately felt relief.
Posted by squirrelmama at 3:22 PM

If that ever happened here, I think that Mary would move back to her mother's house. Of course, her mother, Connie, once thought she saw a lion in her back yard. And actually, once, Sam & I trailered Magic there and brought her in the back yard and rang the bell..