Cast in a new role

Her name is Violet, and she is not much bigger than the soft, violet-colored cast crafted of vet wrap that presently protects her injured front leg. 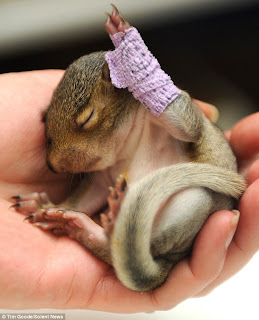 Violet made news just a few days ago when she tumbled out of the nest in a tree, as it was being cut down, landing her, front and center, on the Huffington Post website as a squirrel in distress. MSNBC, The Daily Mail and a few other news services also picked up the story and ran with it.

And there, through it all, was this photo of Violet, cradled gently in the palm of some anonymous, off-camera caretaker at the Wildlife Aid Foundation in Surrey, England. It was her shining moment of glory, her celebration of a life saved - a not insignificant act, considering this occurred in Britain, where eastern gray squirrels are viewed as non-native, invasive, unwanted pests and are often the focus of sanctioned killing sprees.

Violet is clearly an eastern gray squirrel. A not-quite-3-week-old, eyes-closed, injured, orphaned and very important eastern gray squirrel. And she is very much wanted. The rescuers have committed to caring for her and her brother, who was given the name Fred, until their release back into the wild in a few months when they are healthy and grown.

So her little purple cast has become more than a vehicle for her recovery. It is a symbol of the love and responsibility people can still have for the tiny, the helpless and the disenfranchised among us.

There is no doubt that before she and Fred are released, this tiny squirrel will stir more than her weight in compassion and awareness that even in a hostile world there can be hope.
Posted by squirrelmama at 2:30 PM

what a beautiful story..thanks for sharing!

It's so good to know that she's being given such kind and loving care.

Thanks Leema, Arro and Silke - stories like this make me feel more hopeful about the future of people's relationships with animals!

I love this story

I love this story

There is hope for mankind yet.

Yes, I would like to believe that. Hearing about Violet makes me want to believe.

What a great capture.

Every once in a while I drop in to check what's happening in the 'squirrel-world' and your stories give me a great look :)

Glad you enjoyed! And...good to see you here again!! Have missed seeing your posts, hope all is well.

I really enjoyed reading that..

Great story Caryn! The story about how Eastern Grey Squirrels got to England is pretty funny too! They should view it as "the gift that keeps on giving!" :)

Ah, if only they did Zachary. Because they truly ARE a gift.