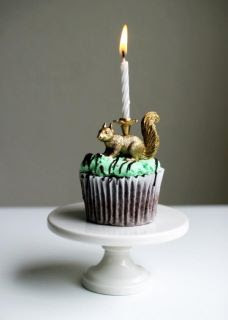 Sure, there's inarguably something sweet about squirrels. But I never expected it might be the frosting that surrounds their tiny paws.

And still, there you see them - squirrels, that is - adorning cupcakes, layer cakes and the occasional torte. Paws down, they're the cutest things to come along since someone thought a bride-and-groom topper might be an appropriate inclusion for the dessert portion of a wedding reception. (The two examples seen here were provided to me via Facebook postings, and I am fairly certain there are at least a baker's dozen more out there.)

And now, squirrels have begun showing up in the bakeries of the world - and not just because someone left the front door open and got careless with a bag of hazelnut flour. Squirrel cookie-cutters are nothing new, of course. But now the market is starting to display squirrel cake- and cupcake-toppers, all imaginative things that set the stage, and the theme, for an entire feast based on their woodland antics. 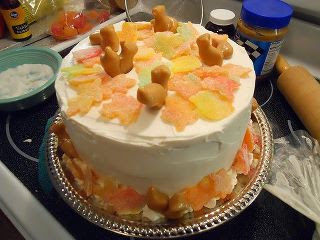 This isn't necessarily a bad thing. It's a happy revelation whenever squirrels can be accepted as consumer decor, instead of a consumer delicacy (as is advocated in hotspots such as the United Kingdom right now).

But let good manners prevail, nonetheless. Enjoy a slice of squirrel-adorned layer cake but eat it now. Don't squirrel it away for another moment. German chocolate cake or hazelnut torte was not meant to be buried.

Like the squirrel, live in the moment, especially when it comes to desserts. Let good manners and good taste be the icing on the cake.
Posted by squirrelmama at 3:16 PM

werds get in the whey ...consumed by the sweetness

I never thought I would find a blog about squirrels. Very cool!