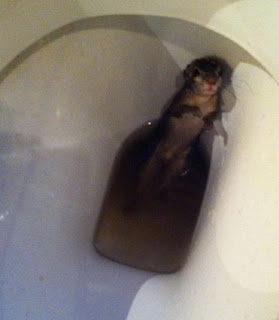 How did a young squirrel get trapped inside the toilet of a businessman's hotel room in Malawi?

That is, in fact, what happened according to this account, and many others, about traveling entrepreneur Duncan Goose.

In the photo taken by the startled traveler, the squirrel, to say the least, looks distressed, if not altogether disgusted: A ceramic commode is not exactly a treetop in the great outdoors, and there is no material to be found in a toilet bowl that makes for suitable nesting.

The British businessman, however, had the presence of mind (once he overcame the shock) to rescue the little squirrel and set him (or her) free. That was both a kindness, and a commendable move.

This is not the first time a squirrel and a toilet have had a similarly unpleasant encounter. In December, an unfortunate squirrel turned up in an equally flushable situation as related by a news account we wrote about from Oklahoma. In September 2008, a story from Canada told how another squirrel, entrapped in the household plumbing fixture, freed himself and became airborne toward the little boy who discovered him.

Perhaps that style exit was appropriate, seeing as the Canadian rodent in this situation was a flying squirrel.

But what of Duncan Goose's discovery? Did the squirrel know that Goose, by virtue of his career, had an intimate relationships with toilets: His company manufacturers toilet tissue.

However, it was a nearby hand towel - and not a single-ply roll - that proved to be the little creature's salvation. Goose proferred it as a makeshift ladder to climb and I am sure the little squirrel was at least momentarily grateful.

But why do the denizens of oak and maple end up, every now and again, entrapped in the legacy purportedly left by Sir Thomas Crapper?

This will, perhaps, continue to be a mystery well-worth plumbing.
Posted by squirrelmama at 3:24 PM

There seems to be endless mysteries to discover about our furry friends.

At first glance that did not look like a squirrel in that toilet. I'm just saying.

Shaky Jake, yeah.......I know what you're saying. However, you gotta know that squirrel is way cuter. LOL!

LGsquirrel, this will always be a mystery to me, though a few people have suggested the squirrel may have come in through one of the pipes on the roof. I still don't get it.

I know, this story was particularly upsetting to me too. Even though (I hope) the happy ending is real.