Every high school class had at least one - the girl who'd go with any guy, the one whose reputation won her a kind of red letter emblazoned across her chest (or any other equally active body part).

Now, it seems, almost every tree in the United Kingdom has one too: A red squirrel for whom The Mating Game constitutes a second career, if not an obsession, second only to the gathering and cracking of nuts. 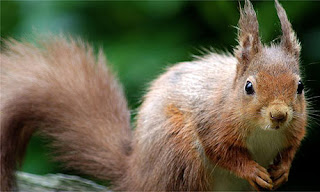 The truth can finally be told: Female red squirrels in Britain are sluts. Bad girls. Bushytailed hos. Researchers at the University of Guelph in Toronto are making big news as the academic peeping Toms who have successfully charted the drey-hopping ways of these frisky hot mommas.

It all comes down to opportunity, big opportunity, on the single day in the breeding season when the female reds come into season. They don't just wanna have fun, they wanna have a healthy litter and the more they shop around where the sample is ample, the more likely they are to achieve their goal.

"We found the more males in the area interested in participating in the mating chase, the more squirrels she will mate with," Guelph researcher Eryn McFarlane is quoted as saying in a variety of published accounts of this report.

So the likelihood is eventually that most red squirrel females will indeed find their Mr. Right. They can't go wrong. After all, a tree is not just a tree anymore: It's a singles bar.
Posted by squirrelmama at 10:43 PM