Giving a squirrel a brake

Wildlife rehabilitators are known to build unlikely alliances all the time: A tree-cutter, an exterminator, even the occasional hunter.

Now add to that list, automobile parts manufacturer. And, even more locally, add neighborhood auto mechanics who stock those auto parts, made by Monroe, thus taking up the mantle as Squirrel Savior.

On Long Island, one local repair shop waves this flag of allegiance publicly and proudly: 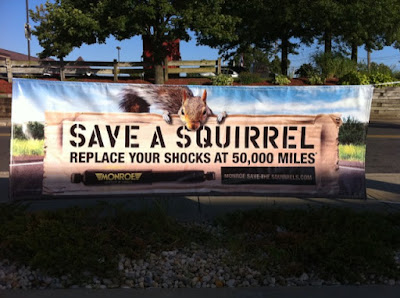 My longtime friend, David P., a professional photographer who sent me this image shortly after discovering it, couldn't have been more impressed to learn that the auto fix-it folks down the street from him are not just customer-friendly but squirrel-friendly too.

In a marketplace where ethics and conscience count, consumers who are energy-conscious, who recycle, who reduce the waste-stream and make purchases that are organic and non-polluting are considered "green."

By inference, Monroe and its patrons are "grey."

The message, in this well-publicized national ad campaign is that if you equip your car or SUV with a Monroe shock or two, you will be able to stop easily and instantly just in case a squirrel, absorbed in the daily rush-hour of autumnal activities, cannot.

Toward that end, this banner is warm and good-humored, engaging and convincing. And the squirrel? Too cute for words. Except for one word - Monroe - which is, of course, the campaign's whole idea. That's the one word they want you to remember.

I know I won't forget. I know that seeing it made me slam on the brakes on whatever I was doing at my computer when this beautiful image arrived in my inbox - and take notice of it. Effective. Dramatic. And, yeah, downright adorable.

Call it "Monroe Shock and awwwwwwwwwwww."
Posted by squirrelmama at 12:41 PM

what a great ad campaign....tell those squirrels now to stay out of traffic!!

We should also have bumper stickers that say "I brake for squirrels".

Hah shock and awe, cute ;) that's such a cute billboard!