For Scottish squirrels, a sweetheart deal 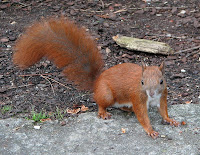 I guess you could call it a Sweetheart deal for the Scottish: a new campaign to save the native red squirrels.

Launched on Valentine's Day, and given full backing by the Scottish government, the three-year effort by two conservation groups urges local citizens to assume stewardship (a financial stewardship, in this case) for woodlands, preserving them so they will continue to have habitat, even as they battle a viral infection known as pox, brought to their country by grey squirrels - an introduced species that is, sadly, viewed as a threat.

The two groups are collecting money for a cause close to Scottish citizens' own hearts: Scotland doesn't just want to halt the decline of the reds, but reinvigorate their spread across the nation once more. The campaign takes a positive approach to supporting the reds, a different variety of red squirrel than the ones we have here in the States, and definitely a national treasure.

This is good news for the red squirrel, though it makes me wonder if there can ever be developed a similarly positive, and nonviolent, option for stemming the overtake by the greys, who never asked to cross the Atlantic in the first place.

One can only hope.
Posted by squirrelmama at 10:45 AM

Long live the Grey Squirrel...and the Red, and the Black and the Tree and the Eurasian and the Waterloo Brown (I made that one up).

Squirrel wars..too bad about the pox. The native species must be protected but hopefully not at the expense of the greys. Good for the Scottish!

They are so beautiful!

I'm English but live in Scotland...and have just written a poem about red squirrels (just a little one).
Let me know if you'd like to see it - my email is author@crowd-pleasers.net