Don't mess with the groundhog

To all of you who scoffed at Punxsutawney Phil's prediction of six more weeks of winter, pay heed to the winter storm that is quickly consuming the East Coast of the United States.

Don't mess with the groundhog!

Phil meant no harm with his February prognostication, he was only doing his job, and as the King of Forecasting Squirrels, this rodent is all pro. Indeed, there are many meteorologists out there who owe him their lives, if not their livelihoods 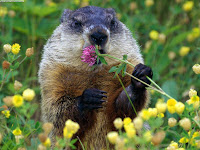 Don't mess with the groundhog.

Folks can throw their Phil Wanna-be woodchucks in front of the TV cameras and vow they're just as accurate as the Big Kahuna of Weathercasting but, in the end, the skies, the clouds and the barometric pressure issue the ultimate final judgment, and that decree says:

Don't mess with the groundhog.

It's going to be a splendid storm, folks, and I plan to enjoy it, to wake up and face the pristine snow where only bird footprints and squirrel footprints leave a tale to tell, like punctuation marks printed neatly across a clean white canvas.

As for me, I wouldn't dream of messing with the groundhog. Besides, he's back in his burrow sleeping for the next couple of weeks or so while we humans grumble about our fate: Into every life a little (or a whole lot) of snow must fall. Just ask the groundhog.
Posted by squirrelmama at 10:19 PM

Here's Dallas with another unrelated comment, but good squirrel lead. Two wine guys in Texas have lampooned the American Wine Blogging Awards with their own awards. Y'all will love it. Here's the link: http://lasfloressquirrels.wordpress.com/2009/03/01/american-squirrel-wine-blog-award-winners/

I never mess with groundhogs..no way!!
BTW I loved the caption you left with my evel bunny picture. I'd like to use it on the card with your permission.:)

The groundhog is KING. Digging out this morning I reminded myself of that!
And yes, by all means, I am flattered you want to use the caption!

There seem to be so many folk tales about groundhogs I cant keep up with them! I have never seen one. They seem to look a little like a guinea pig.

Hey, guys, did you not get my link to the American Squirrel Blog Awards? http://lasfloressquirrels.wordpress.com/2009/03/01/american-squirrel-wine-blog-award-winners/
This is a lampoon of the American Wine Blog Awards, but the squirrel site it's hosted on is real. I thought it was really cute, wanted to give you a heads-up. Maybe my comment did not go through? Dallas

merinz, the swedish squirrel is lovely - thanks for the tip on the link to that site. I have posted a comment offering appreciation for the blogger's father. He seems like someone who genuinely cares that this squirrel and the others get to eat.
Dallas, your original post did not go through, I definitely would have remembered this awards site, it is hysterical! Gotta spend more time squirreling around on this site, it's a winner!

You got that right, sister!