Ambushed by a Bushytail

The week started well for Rumor, the 5-year-old German shepherd anointed on Feb. 13 by the American Kennel Club as Westminster's Best in Show. Shepherds, known for their beauty, their heart, their loyalty -- and now their sense of chic, since this honor also fell during New York Fashion Week -- are also stalwart symbols of the Long Leash of the Law. As the K9 officers who serve beside them will attest, it takes a lot of work to best a German shepherd, especially in the field of law enforcement. 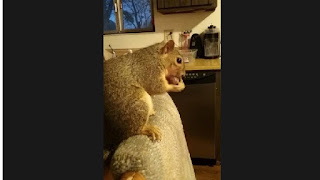 Enter Joey, all 2 pounds of him - and all squirrel.

Or let us say: enter Joey but break-and-enter a teenaged would-be burglar who found his way inside the home of Adam and Carmen Pearl in Meriden, Idaho. Joey apparently had been resting, as he often does, in his favorite hammock when the interloper loped in with serious theft on his mind.

Born to gather and cache nuts as his birthright and his privilege, Joey appears to equally respect and defend the right of Mr. and Mrs. Pearl to do the same -- whatever nuts may be of their choosing. And so the young fox squirrel sprang into action to defend his family's nut stash. He became airborne with such polished aim as to land directly on the burglar as the teen tried to crack - well, not a nut, but the family's safe.

Local media accounts say the acrobatic feat was sufficient to scare the miscreant off. The young suspect was later tracked down - though media reports don't say whether the arresting officers were humans or whether they called in their own German shepherds to sniff the suspect out.

Or perhaps this was a case for Secret Squirrel, Hanna Barbera's trenchcoat-clad sleuth?

This surely would have made one fine episode for that Sixties-era rodent spy. And this time the spotlight would have been only for Joey, the Pearl family's six-month-old backyard rescue -- anointed Best in Show after all.

Posted by squirrelmama at 8:49 PM

The only surprise here is that it wasn't an Eastern Gray who are known for their battle-ready personality.