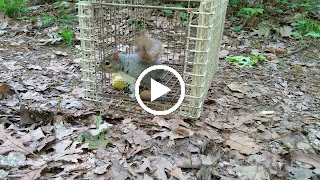 Ultimately, this is what it comes to: a reaching for the edge of the known universe, like Christopher Columbus dawning upon the new world.

But the world that greets this newly released squirrel is an old one. To him it is an ancient, familiar turf. The brown of his eyes, savoring their encounter with the wooded landscape, is the same hue as the forest floor. The woods, this squirrel -- the two are inextricable from one another's genes. He feels it: This was his world long before his eyelids even parted to welcome the sunlight, the same light that streams across his face now as he contemplates the changing edge of his known world.

In the parlance of wildlife rehabilitation, this is the process called "release." But that suggests an imprisonment, a holding against one's will. Though hand-rearing and captivity is the consequence of nature interrupted, not the natural order of things, the intervention provides a lifesaving grace, a second chance, a way back into the life that is written into their bones. 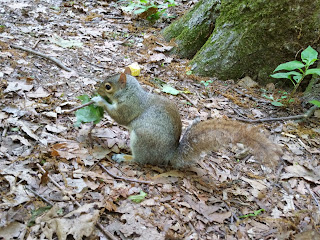 And so he reaches - first, for that formative touch of soil, then the fallen leaves and ultimately the trees. He steps forward. He steps back.

And then he turns his brown eyes away forever. He does not look back. He has sailed over the horizon, landing sure-footed on that distant continent.
Posted by squirrelmama at 5:27 PM

You wear it well...keep writing..

Even though it is the bitter-sweet one of "release," thank goodness for your new posting! (I could only hold my breath so long.)

How I love this blog and how I love your writing about "this thing we do", wildlife rehab. Your "Into the Woods" is on my wall and I read it every release time. This one brings me to tears, as well. Thank you Caryn, for putting into such lyrical prose what we all feel in our hearts.