The squirrels are back from the polling place. The lines, of course, were long. But when their turns came, they voted, as usual, without hesitation or ambiguity.

They know what it means to live in a Nutocracy. Whether one is a follower of Walnuts, Pecans or the fiercely independent Hazelnuts, squirrels value the right to elect the nut of their choosing.

Squirrels know that the dynamic of politics is, and always has been, the kind of shell game one can really sink their teeth into. These stalwart little citizens vote with their feet - lacking hands, they really have no choice, anyway.

And now, their Election Day duties done, they are back outside, begging for handouts. This is not Wildlife Welfare, however, nor government entitlement. It is their birthright as American Eastern Grey Squirrels to have free and open access to the fruit of America's trees. They constitute the swing vote, only in that they swing from the trees. 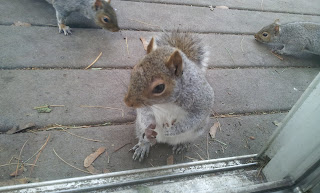 As the sun sets soon on Election Day 2012, and the nation faces change - or perhaps more of the same - I pledge allegiance once again to the squirrels, one of the few constants we can count on in a modern nation growing ever more distressed.

Never mind the blue or the red. I will always follow the grey. Long may their tails wave.
Posted by squirrelmama at 2:30 PM

America needs to break free of a two party system. The Grey Party may be just what is needed.

Your wit goes far beyond sarcasm, in that, you give out the message but make it seem like an innocuous squirrel post.