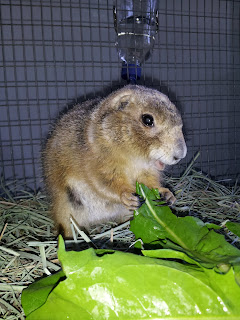 We can rescue them from abandonment, cruelty or neglect. We can save them from the devastating impact of a predator's assault, from injury, ailment or even congenital flaw.

Indeed, we can even endeavor to deflect the very damage caused by others of our own species. Tragically, wildlife rescuers undertake this all too often.

Prairie dogs - native North American ground squirrels with a highly social nature - are special creatures of the earth. They thrive in an unseen, underground metropolis that is ever-diminishing throughout the American West. And their rescue historically has not always been a popular prospect there.

In 2003, the symbol of their struggle emerged from a burrow on an East Coast beach. This gentle female was pulled from the unlikely New York setting 9 Augusts ago, almost to the day of this writing. An unexpected media star who illuminated the unrelenting genocide against her species, Fire Island Philomena, as she came to be called, was embraced as well in pet-rescue circles. A transplant to New York via the retail trade, she was an exotic pet who shared the pain of her more conventional brother and sister companion animals: Her entertainment value had clearly run an almost fatal course with the humans who had purchased her. They dumped her on a grassy Atlantic barrier beach just beneath a busy hawk migration flyway.

Her detection and triumphant rescue 18 months later made headlines. And so, for a time, did the politics of wildlife persecution itself. But the rescue ultimately fulfilled its most private mission: Fire Island Philomena spent the next 9 years living back underground, at least in spirit, in a burrow of quiet anonymity with others of her own kind.

She had no issues, no trauma, no complications from her ordeal. She simply went forward into her life. This is, after all, the essence of wildlife rescue: to restore the future that is every animal's birthright.

But even rescue has its endpoint, as do the lives of these squirrels which, on the prairie, rarely extend past 5 or 6 years. There is no dispensation, then, when days become months and months become years. The body becomes weary even if the spirit still soars.

Tonight her spirit soared. There is no rescue from the cycle of life and, perhaps, no need for it after all. This gentle creature, grown too old for the earth that once sustained her, has gone home again.
Posted by squirrelmama at 11:25 PM

RIP sweet girl! You can join the many of your kind that I, too, have known as sweet loving gentle beings, at the rainbow bridge.

RIP sweet girl. You can join the others of your kind, who I too have known to be gentle, kind, loving beings, at the rainbow bridge.

Rest in Peace. I am thankful that you had people who cared enough to give you the chance to live a natural and full life.

Rest in the arms of the angels, Philomena. You brought many of us to the world of your species for the first time, and changed our impressions forever. Watch over your mamma Caryn, sweet girl.

Live on now with your youth restored to match that spirit. You were loved little one.

See you on the other side, gentle girl.<3 You were loved, and in this world that means more than anything.

So sorry for your loss. Philomena, run free, girl. "'til we meet again at Fiddler's Green". You left this place for a better one, knowing that you were loved...

So sorry for your loss. Philomena, run free, girl. "'til we meet again at Fiddler's Green". You left this place for a better one, knowing that you were loved...

I am so very sorry to hear this news! May she Rest in Peace!

Rest in peace sweetie. The lessons you taught us humans will not soon be forgotten

Rest in peace sweet girl. Bless your giant heart and even greater spirit.

As I write this tears are rolling down my face, animals are gifts from our creator God they are such blessings ! As owner of two beautiful rescue prairie dogs I marvel at their Character and spirit each one with their own personalities. Animals give us so much and ask only for kindness and food. I simply can't imagine my life without. In memory of this litle one lets ALL be kinder to these prairie dogs and squirrels as well as all animals. Animals have feelings and little souls, God tells us to take care of them of which he gave to us.
Rest in peace, in loving memory of a sweet and gentle embassador who taught us lessons of love, you will be greatly missed.

Dear Philomena, Dear Squirrel Mama, how sad the short life, how happy the outcome of what might have been an unknown tragedy. May Philomena know a prairie dog heaven in which all who knew of her and loved her may always be with her. Thank you for the life you've given her, as she would thank you in this life or any other.

What a beautiful eulogy to such an icon in the PD world. Your words of endearment are both soulful & soul searching. Philomena is now at The Rainbow Bridge, playing w/ countless others. Then one day, you two will re-united & cross the Bridge together.

Rest in Peace Philly. You said it best Caryn: "Tonight her spirit soared." We will continue to remember her courage and spirit fondly always.

Words written so eloquently for a special little prairie dog, by her favorite human who showed her a life full of love, made her feel safe, and introduced her to friends like her. RIP Philomena ~ enjoy the plush green pastures over the Rainbow Bridge. You will be in our hearts forever.

Many blessings to Caryn whose loving heart gave Philomena the chance to soar in body and now in spirit. Thank you for sharing Philomena with the world! And many blessings and thanks to Philomena for her perseverant heart and soul. May you both find peace!

Such an amazing story. R.I.P. Sweety.

Philomena was a gift that none of us took for granted. She brought together a group of "her special friends and champions of The Underdog."
She made us strong, wise, and grateful.
She touched my heart, educated my mind, and showed me that it was never too late to become what I might have.
I will never forget Philly or the wonderful prairie dog ladies named Caryn and Pam who refused to give up on rescuing her.