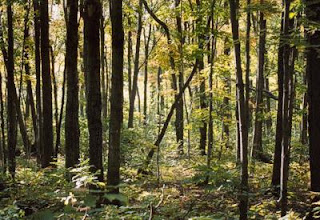 They had names, but it serves no purpose to utter them now.

Their arrivals were trailed by stories from their rescuers but this morning, those stories of rescue ended when the adventure of freedom began.

Three young squirrels, saved last fall in three separate incidents and wintered over in care through the difficult season, were released back into their lives, and as they explored the world beyond their carrying cage, they took their names and their stories with them.

Neither will be of use to them now: Everything about them has blended into history just as their coats now meld seamlessly with the high bark of the woodland trees. This trio is indistinguishable from the parts of the forest they were born to inhabit.

In videos and photos, I can always hold them forever.

In truth, though, they were never mine.

Godspeed, little ones.
Posted by squirrelmama at 2:58 PM

It is beautifully written. Thanks.

How perfectly this statement describes the experience of releasing wildlife we have rehabilitated, Caryn! The words stick in my throat and tears well up. I have a merry band to release here, as well...I thank you for what will soon be my mantra, on my own release day.

You will always cherish them Caryn...You are a great mama!!!

Remarkably moving post--it captures the joy of rescue and rehab, and the sadness but satisfaction of release.
You've helped make the world that much more wonderful, ensuring Nature continues to Nature.

Harris, thank you. Please come back again. I visited your website; you are a very talented photographer!

You have their videos?

I do indeed have videos of them as they were being raised - I don't believe I took a video of their release. The videos catalogue their gradual development - from nursing babies into active juveniles, and some of them have been video'd cracking their first nut!!