Now it's getting ugly. Enough already. The news is swirling once again with news of yet another squirrel "attack," this one in Bennington, Vermont. 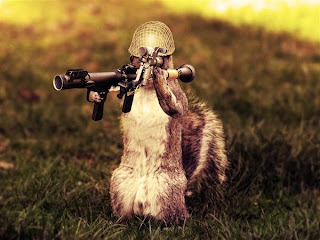 Hide the kids, folks. While you're at it, hide your elderly relatives too: Both print and broadcast reports even are even making use the "R" word (rabies), a virus not commonly associated with squirrels. Squirrels simply don't carry it, they simply don't harbor or transmit the deadly virus. The only thing going viral here is the report of the Mad Serial Killer Rodent of Vermont, the suspect identified as a furry, gray 2-pound assassin who stalks his human victims and then detonates himself as an out-of-control IED.

These reports liken the squirrel to nature's own Weapon of Mass Destruction. But this sounds more like mass hysteria than anything else - and the media outlets aren't helping. At least the Fox channel right there in Bennington, Vermont had the good sense to include the wizened input of one of the wildlife wardens whose words of reassurance seemed somehow to calm the crazed locals. A newspaper did the responsible thing and quoted a local veterinarian who, pretty much, provided the same reassurance. Hopefully that had a calming influence on residents who probably began seeking refuge in whatever bomb shelters were left over from the Cold War era. (Hey, if they were good enough to ward off the Russians, they should work just fine against the squirrels, no?)

C'mon Vermonters. You know better. Your state is probably one of the northeast's last bastions of nature-friendliness.

Know this as a fact: Squirrels are not predators. They rank, unfortunately, quite low on the food chain which places their status at prey. That's "prey," meaning that someone is out to get them and eat them. Sometimes a hawk, sometimes an owl, sometimes a fox. Even a stray cat or, yes, a sports-minded human toting a loaded gun.

Are killer squirrels are out there, clinging to every tree branch, stalking us, waiting to get us? I think not.

They might well ask us to pray instead of prey. Seems they need it, these days. Ignorance can be deadly. Especially in Vermont.
Posted by squirrelmama at 12:25 PM

Are these complainers really from Vermont? I would have expected a Vermonter to pull a gun on anything that looked crosseyed (they're big on vision). Or perhaps it's an attempt to make squirrel shooting seem more glamorous? to go one on one with one of the most dangerous critters to stalk the Earth. Look at those teeth! They just grow and grow and grow! Quick! Get it before it gets us.

Wow, I think people in Vermont really need to find something better to do than pick on squirrels.

Chet, Nikki, I couldn't agree more. I am disappointed that the good people of Vermont didn't take a deep breath and decide to act rationally instead of giving in to irrational fears.