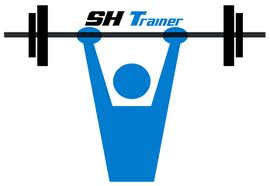 They have big butts, fat necks and haven't stopped eating since the holiday season started more than a month ago. They make no apologies for their excessive avoirdupois: Finding a ready stash of goodies, they would eat it while upside-down, if need be. And often, they do:

Squirrels are going heels-over-head for any chance at a fast-paced, no-holds-barred eating binge, whether at the bird-feeder, the exposed garbage pail or even a picnic table in spring. They'll hang on your back door. Your front door. Your pants leg, even. 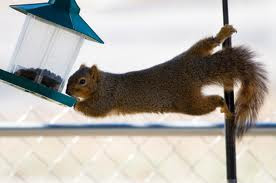 It's 2011 and you won't find any self-conscious squirrels sucking in their midsections or squeezing their lard-upholstered back ends into some fashionable workout suit just to impress other squirrels. They are at their fattest at this time of year, which also happens to be the season for squirrel dating and mating. And mid-winter flab does not stand between any squirrel and the chance to have a hot Saturday night any day of the week.

Their motto: "Love thy blubber as thou wouldst love thyself."

Sooner or later, I suspect, they'll weigh in (so to speak) and tell the rest of us how things went. They'll find most of us waiting to hear - in the far end of the parking lot outside the fitness club.
Posted by squirrelmama at 2:37 PM

so squirrels get to have their FOs and other kinds of O's....!!

Not sucking in their midsections? Even when they're being photographed?

I have a squirrel that hangs upside down and drinks the sugar water from my hummingbird feeder. It's quite a site. They are so much fun.

Squirrels love to steal from the birds but I had no clue they also target hummer feeding stations. These little stinkers never cease to amaze me!