Wiser than the owls

The acceptable, almost universal symbol of wisdom, drawn from wildlife, has almost always been the owl. Sage and wide-eyed, this bird seems to know it all, except perhaps for its only unanswered life question, which it asks perpetually: "WHO?" 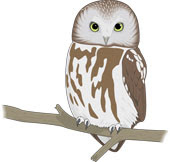 It is time, however, to retire the owl with a new symbol of sagacity.
I hereby nominate the squirrel. Squirrels are known to owls simply as their lunch.
Some of the rest of us know better:

In Miami, Fla., a former school counselor writes in an online column of The Herald, that Stubby, a mother squirrel she has been observing for some time, is a model mother. With respect to the four babies Stubby has been raising, she knows when to nurture and when to let go.

A photo of Mama Stubby shows her to be wiry and wide-eyed, a tiny creature whose physically small brain is obviously crammed full of common sense, survival strategy and yes, wisdom. She is a generous, loving spirit who wants the best for her litter, even if it comes down to tough love. And Mama Stubby, in the urban jungle that is Miami, is making a go of it.

This counselor writes eloquently of the lessons this squirrel has for humans raising youngsters under similar circumstances, lessons of freedom and of faith, of love and of vigilance. And also for getting on with her own life as a squirrel - gathering nuts for winter, preparing for the season ahead and yes, the inevitable winter breeding cycle that begins sometime after Christmas. Stubby will, you see, become a mother again in the spring if the fates are kind.

Perhaps the owl's sole unanswered question is not so perplexing after all, not on issue of wisdom. The still-wise old bird may ask: "WHO?"

Who indeed? No question: Mama Stubby, and all the squirrels.
Posted by squirrelmama at 10:04 PM

Just as a matter of interest - our native owl in New Zealand (Maori name is Ruru)is known as a Morepork. Its cry is not 'whooo' as other owls, but it sounds like it is saying .....'more pork, more pork'.

Wow. Thanks for that, I will enjoy hearing this! I will look for photos of your native owl too, I am sure this creature also looks very different from the ones here.

Your blog keeps getting better and better! Your older articles are not as good as newer ones you have a lot more creativity and originality now keep it up!