You can't see the squirrel for the trees

Barely 24 hours ago she had a name, a routine and a safe haven in our yard.
All that changed this morning when Miss Daisy was released into the wild - and into a life of anonymity.
She is, by all counts, just another eastern gray squirrel snuffling around in the soil, nibbling at leaves and fallen acorns, and testing the tree trunks for scalability. She is, by all counts, indistinguishable from any of the other squirrels out there in that vast mass of acreage. She is, by all counts, anonymous now as night falls around her. 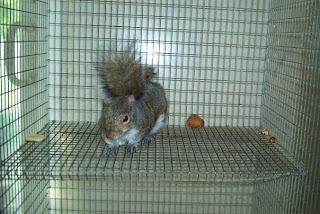 She is not just any squirrel, however. She had been a victim of some kind of trauma in October of 2007 when her nearly immobilized form was found at the edge of our driveway. Whether she had fallen, was hit by a car, or had some other act befall her, we will never know. She was not completely conscious and she was terribly spastic. Her prognosis, according to the vet we consulted, was not a hope-filled one.

Indeed, her two year recovery was slow but encouraging. And everything about it led to this day, this morning, when her months of impatient snarls, her long, aggressive leaps and her obviously growing frustration at captivity led us to grant her wish.

Her leaps today took her to freedom. We had to be sure: She had to be steady enough for the treetops, balanced enough to navigate her world and strong enough to fight for her life.

When I walked out of the woods, I looked over my shoulder. I stopped a few times. And yes, an hour later, I went back to that same spot in the forest but she was no longer there. She had moved into the larger universe, invisible, anonymous and just another squirrel.

Hurray for Miss Daisy! Did she get some of your imported acorns before she left?

Indeed she did. Yesterday. They were her farewell gift. :-)

Wonderfully written! I am so touched to read about all of your wonderful work...good on you

Happiness and sadness. Sadness that the plight of Miss Daisy occurred, happiness that she recovered, and sadness of not being able to track her progress.

All the same, how grand that Miss Daisy could make such a complete recovery, thanks to you, and return to the trees she loves.

Your work must be tremendously satisfying.

Yes, it really truly is. Sometimes though I do wish I had a way of knowing how far they get in life after we send them home to the woods. But I'd like to believe most of them do make it.

How sweet. How sweet. I have been out in the wilds of West Texas, marveling at the wildlife and getting a taste of humility at the McDonald Observatory. (There are 100 BILLION galaxies that we know of. The earth, at 7K miles in diameter, is dwarfed by own sun at, I think, 183K miles diameter. We are such small cosmic potatoes.) You have done a great service to all of nature and a single squirrel. Please know: We all do the best we can do. Then it is up to whatever forces control our greater reality. Best moment in West Texas: sighting a mother javelina and her baby, not even as tall as her belly, feeding near the lodge in the Big Bend National Park. Dallas

Dallas, thank you as usual for your wonderful perspective on things, and your very humbling view. I feel grateful that I am part of the larger picture - even a small part of the larger picture - and that yes, it all makes a difference. For want of a molecule or two, after all, a piece of matter might have a different shape or sense so yes, I do believe it is the little things that count as much as the big things.