The World According to Squirrels

A new book by Alexandra Horowitz, "Inside of a Dog: What Dogs See, Smell and Know," gives humans a dog's eye view of the environment as seen - or rather, sniffed - by this most olfactory of creatures. She writes that dogs are "creatures of the nose" and that their gaze is actually a gesture accomplished via the nostril, and that the input is what shapes their world. 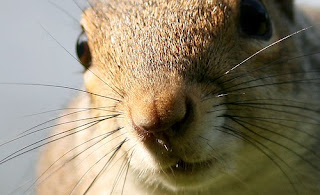 For squirrels, it is likely no different: A squirrel's world is populated by pinecones, nuts, predator urine and, of course, other squirrels, all striking a pose via the nose. A squirrel can sniff out a nut buried beneath a foot or so of snow, which probably would be the nasal equivalent of 70/20 vision. (Fitting the nose with eyeglasses, or noseglasses, would be a challenge however to any squirrels who are olfactorially challenged.)

See this for yourself: Throw a nut or some other goodie at a squirrel and the creature will probably continue to stare at you, even with the treat barely a half-foot away. But once the squirrel catches a whiff of what you've lobbed, all bets are off.

Clearly, this is why there is no U.S.Open tennis championship for squirrels: Tennis balls don't have any distinguishing odors to make them worth pursuing.

The same for competitive diving: Swimming pools smell only of chlorine, a scent unknown to squirrels, and so squirrels also eschew competitions such as Olympic diving (although flying squirrels would likely do quite well).

Likewise, squirrels also don't play soccer or football because, unless the object of the team's pursuit is a giant hazelnut, what's the point?

And squirrels would make awful commercial pilots. Clouds don't smell, and neither do runways. Air-traffic controllers would have a hard time guiding them in to the runway without incident.

But squirrels have better insight than they do foresight or even hindsight and for them, the environment looks so much better when it's viewed nasally. It's no surprise, then that from their own treetop worlds, they're looking down their noses at us!
Posted by squirrelmama at 1:48 AM

Thanks for giving us a squirrel's nose view of the world

I had the impression that squirrels had reasonable eyesight (isn't it the gray that can also see directly overhead?). With all that jumping from branch to branch, wouldn't a gray have a fair idea of where he or she was going?
(And in vision, it's the second number which is important; so someone with 20/5 would be 4 times as accurate as normal, and 20/70 would mean being about 3.5 times off normal.)

Ahhhhhhh, Chet. Thanks to your keen eyesight (yes really) and knowledge of the numbers, I have changed 20/70 to 70/20 to make it more meaningful.
Careful editing is always appreciated.
Re: squirrels' eyesight. It is not entirely clear how they can manage all that leaping and yet not see the nut right in front of them but consistently, they just don't get it. Not even sure if researchers have bothered to tackle this phenomenon but I know people report this from time to time, asking why!

Perhaps squirrels subscribe to the greener pasture law? That is, a nut farther away is so much more tempting than one close at hand.
An eating machine would take the closest nuts, but factoring in the oddities of the mammalian brain would take away (or add) some of the mystery.

Just so you know the squirrels were fed today..They do have their views!

I think some of my squirrels come running when they see me from the back of my yard. But I'm a bigger target than one nut

Hmm you pose some interesting thoughts - a squirrel pilot? squirrel tennis? maybe squiirel jockeys - 'and the race was won by a nose!'