The work week resumed this morning with about 10 to 15 squirrels at the back door, waiting to devour handout pecans and all of my attention. There were also the pre-release squirrels out back in the outdoor pen to be tended to, and the few remaining ready-to-go young adults in their cages indoors.

And about 70 miles east of here, in a small veterinary hospital on Long Island's East End, a small hit-by-car squirrel succumbed overnight to his injuries. We'd called him Shelter Island Shelly when we found him yesterday during a bicycling trip on beautiful Shelter Island, a place of peace, redolent with blooming primrose. 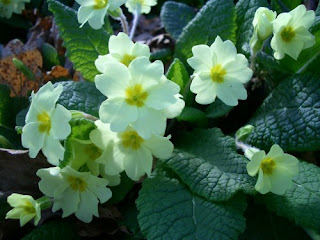 But I will not be returning, as planned, to pick him up later this week to care for him until his release back into the wild. His journey is over.

We surely tried. There were four of us yesterday who came upon him lying on the pavement, and each one did our part. And even as we held his body in our arms, we also cradled his fragile existence. If intention alone were all that was necessary in this world to save any life, the odds were unquestionably in his favor.

In the end, there were forces greater and more powerful than our own that held his life too.

Meanwhile, there are still squirrels at the back door awaiting - no, demanding- the next round of handouts. And there are pre-release squirrels still in my care waiting to get on with their lives in the next few weeks.

And they will. We do what we can, but we can only do that - nothing more.
Posted by squirrelmama at 11:20 AM

I am so sorry about Shelter Island Shelly but I am glad that he did not die alone and uncared for. This simple act of kindness has made for a better world.

I wish that it could have turned out better, especially given the circumstance of your being there at that particular time.

But there is a constant thru life that bears repeating:

"And they will. We do what we can, but we can only do that - nothing more."

To do what one can--it reminded me of the epigraph to the fifth movement of Vaughn-William's 7th symphony from Captain Scott of the Antarctic:

"I do not regret this journey; we took risks, we knew we took them, things have come out against us, therefore we have no cause for complaint."

The words could have been said by Explorer Squirrel, but it all comes done to trying to do the best we can in a given situation. And to keep trying. And in the keeping to make a difference.

So sorry about the little fellow. This is always the worst part of doing any rescue work...

I'm so sorry for your loss. At least he was able to spend the time he had left in a warm, comfortable environment thanks to the kindness of you and your friends. Rest in Peace, Shelter Island Shelly.

You did your best for the little guy. At least he didn't just die by the roadside - another anonymous carnage. I commend you all for your efforts.
The primroses are a lovely floral tribute.

(No wonder they are clamouring at your door! Pecans are so yummy!)

Hey! Could I have some of those nuts????? (So sorry about Shelter Island Shelly - I echo the other sentiments. At least he died knowing he was loved.)

So sorry to learn about Shelly's passing. Thank you for taking care of him.