"I Pledge Allegiance To The Nest"

This is no dance macabre, evoking black-cloaked perpetrators involved in midnight mausoleum break-ins and coffin crackings: In fact if anything is being cracked in between these wanton acts of daylight thievery, it is likely a few pounds of hard-shelled walnuts. 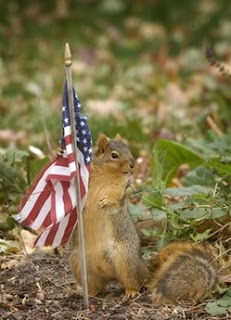 Indeed, the tiny culprit has been caught - almost - grey-handed: An eastern grey squirrel was sighted swiping American flags from the final resting places of military veterans in that Detroit-area cemetery. The squirrel was then seen spiriting the flags off to the treetops where the banners became part of high-flying nests for the next generation of bushytails. Old Glory, it seems, is a perfect size for bedding that cradles good old American newborn squirrels.

Could this be nothing more than an overt act of patriotism by these small natives of American soil? For all we know, the births of their litters could be greeted by a woodland version of Bruce Springsteen's "Born in the U.S.A."

Understandably, the veterans' families and the cemetery administration are bound to be somewhat upset. Squirrels, they must be thinking, should stick to raiding birdfeeders and not graves.

But the squirrels are not desecrating these final resting places, and they mean the veterans no disrespect. Besides, if we are often exhorted to fly our flag high and with pride, it could soar no higher than in those very treetops.
Posted by squirrelmama at 11:13 PM

That is a great photo and a very interesting post. I hope all the patriots, human and squirrel learn to live together.

These squirrels are just jumping on the "green" bandwagon. Reusing what's out there and creating a home sweet home!

That is a darling picture. Interesting post, I always thought that squirrels used twigs and leaves for their nests. Now I will start putting out soft material for their nests.

Great story! I found another link to it where there are pics posted of the flags up in the tree and of the alleged culprits.

I swear that for the very first time I feel totally patriotic. Your posting makes me want to decorate the outside with little US flags everywhere.

What an amazing photo! And story.

Again? Haven't you heard a story like this before?