What's in a name, squirrel?

Let's face it, squirrels seem to sell themselves. Anyone who's seen their acrobatics under (or atop) a tree, or been cornered by their hard-sell nut-begging behavior that cries out, "we don't take 'no' for an answer," knows this. You buy into their gambit even without realizing it.

So it's only natural that human marketers would harness a little squirrel power behind some more everyday people-pleasing commodities, everything from beer and wine to candies and even a music group. 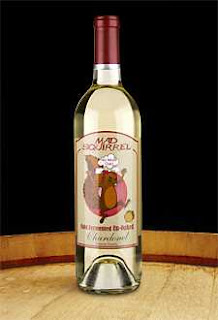 Take Mad Squirrel Chardonel, for instance. This is a wine produced by Mary Michelle wines in Illinois and presumably, a few glasses do NOT leave you bright-eyed anymore but your tongue may feel a bit bushy-tailed. For those who prefer something more grainy than grape, there is Fat Squirrel Ale, which comes to us from a Wisconsin-based brewer. (Grain being a carbohydrate, presumably we know how and why the squirrel got fat.)

The sweeter side of life is celebrated by the Buddy Squirrel line of nut candies, also in Wisconsin, and the Squirrel Nut Zippers, an old-time American caramel favorite whose name was adopted by a stylish, popular and now-defunct music group. 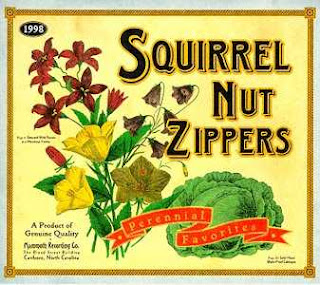 And let's not forget technology. There is even a Squirrel Programming Language.

Squirrels, of course, get no royalties from all this use of their wit, charm and cuteness because, as squirrelly as some folks think lawyers may be, there are no squirrel lawyers - at least not yet. Perhaps, however, that is the next industry to capitalize on harnessing squirrel power.

I can just see the shingle hanging outside the office door now: Chatterer, Rodentay & Bushytail, Acornies-at-Law 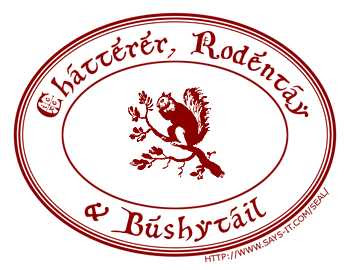 Posted by squirrelmama at 9:43 PM

We have no squirrels in New Zealand - but my Canadian friend found a grey squirrel door stop ornament at a Garage sale and bought it as it reminded her of home. She kept this lovely little fellow for many years but eventually she packed up to go back to Canada. I said that I would look after him. But I am not coming back she said, you may as well keep him.

So I did, and I got many comments about him sitting faithfully at my front door. However I never ever felt that he was mine. Sadly things did not work out for my friend back in her home country and she returned to NZ to live.

Her faithful squirrel is now back with her where he belongs!

I'm sorry things did not work out for her but a happy reunion is always nice.
I do have to wonder if the next find she discovers at a garage sale might somehow find its way to your hands as your very own personal squirrel??

Enjoyed this imaginative post. Squirrel lawyers gotta be something we should avoid.

How did I miss this? Too funny, Squirrelmama! Love the shingle - I gots to get me one of those!